Rot Grubs vs. Sons of Kyuss

Part 2 of an ongoing series ... Sometimes the Fiend Folio is better. 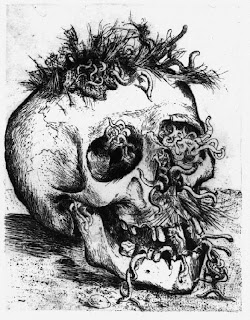 How would you rather be insta-killed?

By a white maggot that hops on you as you search a centuries-old mound of poop for treasure, burrows through you, and eats your heart?

Or by a bright green worm that hops on you from a worm farm that is in the skull of a shambling living corpse with which you are locked in deadly melee ... a corpse, spawned by a horrific demigod, that regenerates, causes fear, and as if all that plus the worms were not enough, infects you with leprosy at its very touch ... but back to the worm ... the worm that hops on you, burrows through you, and eats your brain, turning you instantly into another Son of Kyuss?

Oh, and here's the clincher: as you shamble around the dungeon, your skull squirming with worms, you feel like a million bucks, because the second most influential hard rock band of the 90's was named after you.
Posted by Roger G-S at 14:13