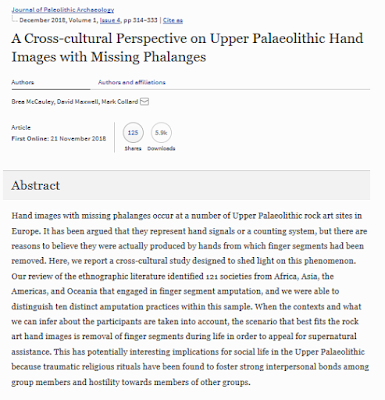 Fingertip option: remove a fingertip for half the DEX penalty (rounded up) and access to a bonus spell at existing caster level.
Posted by Roger G-S at 08:40 1 comment: 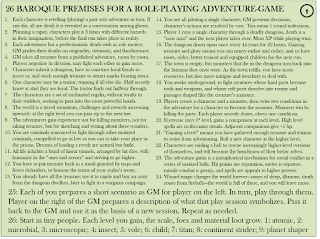 1.Each character is retelling (playing) a past solo adventure in turn. If any die, all are dead; it is revealed as a conversation among ghosts.
2.Planning a caper, characters play it 3 times with different hazards in their imagination, before the final run takes place in reality.
3.Each adventurer has a perfectionistic death wish as sole motive; GM grades their deaths on originality, virtuosity, and flamboyance.
4.GM takes all treasure from a published adventure, room by room. Players negotiate its division, may fight each other to gain more.
5.Characters inherit a dungeon, have to convince local fiends to move in, and stock enough treasure to attract marks bearing items.
6.One character may be a traitor, winning if all else die. Half secretly know at start they are loyal. The traitor finds out halfway through.
7.The characters are a set of enchanted regalia, without loyalty to their wielders, seeking to pass into the most powerful hands.
8.The world is a tiered mountain, challenges and rewards increasing upwards: at the right level you can pass up to the next tier.
9.The adventurers gain experience not for killing monsters, not for taking treasure, but for sketching and writing about these wonders.
10.You are criminals sentenced to fight through other mutated criminals, compelled to go as low as you can to take your place in the prison. Dreams of leading a revolt are natural but futile.
11.All life inhabits a braid of linear tunnels, arranged by hit dice, with humanity in the “ones and zeroes” and striving to go higher.
12.You have to put treasure back in a tomb guarded by traps and fierce defenders, to honour the terms of your realm’s treaty.
13.You already have all the treasure; use it to cajole and buy an army from the dungeon dwellers, later to fight in a wargame campaign.
14.You are all piloting a single character; GM presents decisions, character’s actions are resolved by vote. Ties mean 1 round indecision.
15.Player 1 runs a single character through a deadly dungeon, death is a “near miss” and the next player takes over. Most XP while playing wins.
16.The dungeon doors open once every 44 years for 22 hours. Gaining treasure and glory means you can marry earlier and richer, and so have more, older, better trained and equipped children for the next run.
17.The town is empty, but monsters that die in the dungeon turn back into the humans they once were. As the town refills, you have more resources, but also more intrigue and treachery to deal with.
18.You awake underground, to fight creatures whose hard parts become tools and weapons, and whose soft parts dissolve into rooms and passages shaped like the creature’s anatomy.
19.Players create a character and a monster, then write two conditions in the adventure for a character to become the monster. Monsters win by killing the party. Each player secretly draws, obeys one condition.
20.Everyone stays 1st level, gains a companion at each level. High level spells are multi-caster rituals. Adjacent companions give +1 hp.
21.“Gaining a level” means you have gathered enough treasure and trauma to retire from adventuring. Roll a new character at the higher level.
22.Characters are raiding a hell to rescue increasingly higher-level versions of themselves, and will become the henchmen of their better selves.
23.The adventure game is a metaphorical mechanism for social conflict in a series of masked balls. Hit points are reputation, melee is repartee, missile combat is gossip, and spells are appeals to higher powers.
24.Wizard magic changes the world forever—zones of sleep, illusions, death zones from fireballs—the world is full of these, and you will leave more.
25: Each of you prepares a short scenario as GM for player on the left. In turn, play through them. Player on the right of the GM prepares a description of what that play session symbolizes. Pass it back to the GM and use it as the basis of a new session. Repeat as needed.
26: Start as tiny people. Each level you gain, the scale, foes and material loot grow. 1: atomic, 2: microbial, 3: microscopic; 4: insect; 5: vole; 6: child; 7: titan; 8: continent strider; 9: planet shaper
Posted by Roger G-S at 09:32 4 comments: