"Amazon Mutual Wants You!" Volume One, from Dragon Tree Press, is the most interesting and creative of my three old-school pickups (previously, previously).

The concept driving this anthology is very 1982. It's that era in which the first flush of playing D&D straight had faded out, and the kind of self-aware narratives seen in Dave Trampier's "Wormy" comic were taking hold. So, the party are meta-adventurers, having been hired by a guild (the titular Amazon Mutual) to carry out the corpse retrieval clause on other adventurers' insurance policies. The four adventures are four such missions, each with a different author and a markedly different style.

Some of the guild rules are typical AD&D fun-crusher magical fiats. Retrieval teams are geased ("absolutely no save!") not to steal the victims' possessions. Body bags of holding eliminate the problem of lugging corpses back. There are half a dozen better ways to approach the first problem, ways that open the slim possibility of hoodwinking the guild -- Amazon keeps a list of possessions and recovery teams are held liable for missing stuff; an annoying familiar chaperones the rescue effort; and so on. The body bags solve a problem that's nonexistent if the party eliminates all opposition before retrieving the corpses, and kill an element of challenge that should hang over the adventure if they don't.

The book's approach to what we would now call challenge ratings, though, is one of the dead-end gems of the Typewriter Era, up there with the Midkemia attack matrix.
Temple of the Four Gods. The first adventure takes you to retrieve four adventurer bodies from a temple with a prosaic layout, short on monsters and long on tricks and traps. There are a few clues explaining how the temple went over from the four gods to the service of Loki, but overall this is a funhouse mini-dungeon with a few random gleams of dark humor.  Two corpses can be had almost immediately without any fight, one comes after a four-goblin battle, and it's only the last body that forces the players past a meaningful number of tricks and traps. Would run: 3/10.

Stronghold of the Mer-Witch. An underwater cave mission to retrieve two adventurers. One is dead and can be found almost immediately after a nasty fight with a gigantic eel. The other is alive but a captive of the mer-witch deeper in, who commands a small army of mer-orcs and (not very tough) sea trolls, and can throw three death spells a day among other powers. A coral golem and an interestingly furnished underwater torture chamber liven up the otherwise unremarkable, "storehouse, barracks, kitchen" design. Would run: 6/10.

Mission to Danger. The gonzo spirit of early-days roleplaying lives here. The person to be rescued, captive but not yet dead, is a "Hobbit Fighter-Techno" with a pistol, a switchblade, and a deadman switch, for he has mined the dark elves' dungeon fortress to blow sky-high! The DM is asked to play out the ticking clock in four hours of real time. Some nice situations can happen: meeting an illusionist cat who might help with infiltration, a possible fight between an enemy red dragon and a captured rainbow dragon, finding out the hobbit is an ornery and contrary ally, and a treasure hoard that turns into a river of molten gold if the explosives blow. Would run: 8/10.

Grimethorp's Manor. This adventure plays around with the Amazon Mutual premise. The party has to retrieve a peacefully deceased retired adventurer from his mansion, following the letter of his policy, but his ghost doesn't want his body moved. It's a clever concept but the execution is lacking. Until the party finds the body, they will be walking through the mansion rooms with nothing interesting to do. When they try to take the body out, the ghost starts interfering, casting nuisance spells and animating the house's furnishings to attack, just to frighten and annoy but not cause harm. That's also not going to work. You frighten D&D players by taking huge chunks of hit points, and making them roll save-or-die, not by having a rug say "boooo".  Would not run as is, and the adventure needs a lot of editing to work; I'd start by having bandit squatters and other random ruin pests in the mansion to give the adventure a real first act, make the ghost's attacks really dangerous, and on top of that have the rest of the bandits coming home from a raid just as the party is making to leave.
Posted by Roger G-S at 13:08 No comments:

The Awesome Pain in the Ass That Was DragonQuest

Continuing my trio of bargain-bin rescues from Glasgow (actually a gift from Paolo, in lieu of buying an adventure from the system) I present to you DragonQuest, 2nd edition!

Why does this RPG system set my teeth on edge? My nostalgia should be all for SPI and the days of punching out wargame counters, all for Deathmaze and Citadel of Blood and War of the Ring and Sword and Sorcery. But good boardgaming chops do not guarantee a good roleplaying game. 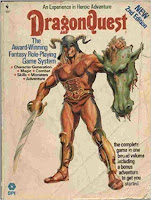 Let's judge a book by its cover. Sorry guys, RPG players are not just dreaming of being Conan. D&D art got that right more often than not. They are in a fantasy-hero world, but team players; just like they're in a horror world, but not doomed, and in a science fantasy world, but stone cold medieval. The Frazetta muscleman hoisting up the results of his DragonQuest like a trophy bass is someone else's idea of "sword and sorcery".

The writing style of the game is a 180 degree reaction against the fast, loose but evocative D&D writing of the time. No gaps and confusing terminology here! DQ is buckled and strapped into the case law structure of an SPI wargame's rules (see 3.7.5.1 and apply the Rules Writing Procedure). If the GM has leeway, we'll tell you exactly where that leeway is. It's meant to be clear, but it's mechanizing and alienating on the page. The wargame influence also shows in the tight regulation of combat on a hex grid.

Maybe case-law would work if the mechanics were more elegant, as in Metagaming's contemporary offering The Fantasy Trip. But they're standard Rolemaster-type fare, a percentile skill system with "RPG 2.0" features like separate fatigue and physical damage, damage-reducing armor, critical hits, background packages, custom advancement ... Determining target numbers might have you multiplying 39 by 2.5. Damage involves frequent table lookups to see if a crit and physical damage happen. God forbid you should have a d6 laying around the house, here, roll one of your d10's and take half for a d5 instead. And roll four of those d5s to determine your character's stats.

But it's funny how often interesting magic systems come attached to clunky base mechanics, while elegant systems like TFT or RuneQuest have difficult or prosaic approaches to magic. Certainly, something was possessing SPI around the turn of the 80's. They had a boardgame about the demons from the Lesser Key of Solomon, and worked some of those names into their Citadel of Blood adventure game. And yes, there's a whole school of DQ demon summoning that ramps up to 16 pages of fully powered Goetic infernal royalty. That menu is clearly where all the love lies, and the other magic schools suffer collectively by comparison. Some are solid, some near-unplayable like the Water Magic school with its Aquaman-style restriction.

By the way, there is a lot of cribbing from D&D, especially in the monster list. And in the kind of rules that compel game balance. Wizards can't cast near cold iron or while being distracted by damage. Player characters who poison their weapons might nick themselves. This points at the heart of the problem, that Dragonquest isn't built around a compelling setting (implicitly, as in D&D, or explicitly, as in Runequest). So much of it is generic that the special stuff fails to stick.

For example, instead of alignment, your characters get a quasi-astrological Aspect which gives them bonuses and penalties for very short periods of the day or year, or around a birth or death. Sounds cool, but it doesn't really resonate with any other social or magical structure, mostly boiling down to an optimum time and place to do housebound skill tests. Only the death aspect has any impact on the typical adventurer, with a +10% bonus just after a mammal dies near you.

At least the 2nd edition book concludes creditably, with a tight little sample adventure in a bandit oasis. It maybe shows, though, that DQ doesn't really know what kind of fantasy game it is. The journey to the camp is described last of all, oh yeah, you might encounter a sand golem. The real detail is put into the characters at the camp, their secrets and intrigues. It's not really necessary that one is a halfling and another is a hobgoblin. The magic, too, is subtle, pulp-story stuff. There are other consequences of aping the pulp era (the camp is run by one "Alla Akabar," and roles for NPC women comprise jealous wife and sex victim). Perhaps the game is more suited for would-be Conans after all?
Posted by Roger G-S at 21:33 9 comments: