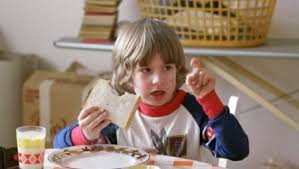 Among the logistics of adventure gaming that I currently handwave is the depletion of arrows and other missile ammo. In practice it's too tedious, forgettable, and character-sheet-messy to cross off every arrow (and pick them up again).

So, if there is a thing that people are supposed to do, and they don't do it, and you think it adds to the play of the game, it's on you as the rules hacker/designer to make it easy. I think as long as people are buying arrows in lots of 12 or 20 they should pay attention to depletion. But until now I haven't come up with an easy rule that makes some kind of sense.

1. If an arrow or crossbow bolt does damage but does not kill its target, cross it off; in effect it gets stuck in there and broken off by the still-alive creature. Sling bullets are hardier, so do not suffer this fate.
2. If the party flees the scene of a combat without time to rest and pick up missiles, anyone who shot missiles crosses off two if the fight was short, five if the fight was long, and more for epic fights. If a player thinks this is too many, they are free to keep track of their missiles one by one.

If your players are marking down TWELVE ARROWS or TWENTY ARROWS IN QUIVER, they can just cross off letters from those phrases as ammo gets depleted. Same goes for TWENTY BULLETS IN POUCH and TWENTY QUARRELS IN CASE.

Gelatinous cubes in D&D have a strong bid to be one of the top ten iconic monsters. They embody the silliness and peril of the dungeon, the conceit that a whole ecology has sprung up around this artificial monster zoo with perfect 10' cross-section corridors. You can outrun them, perhaps, but you can't outflank them, and therein lies their threat. 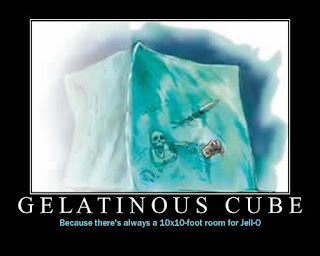 My players killed a wandering gelatinous cube, in the last session but one. They were lucky I filled an oddly shaped but unkeyed corridor in the Castle with peaceful if creepy slugs whose markings resembled human faces. The slugs creeping out of the way of the coming cube alerted a rear guard, whose location at the edge of the lantern light would have otherwise been just what the cube is made for. Now aware of something fishy, they saw light reflections on the surface of the cube and melee was joined.

G-cubes in AD&D go down easy, with only 4 hit dice. Even the players remarked on the oddity of a 10' cube of biomass being so easy to kill. AD&D didn't even make them immune to blunt weapons and taking only 1 damage from piercing (as any amorphous corporeal creature does in my game), but a couple of rounds of magic missiles, a few slashes, and one big sword crit did the deed.

Remember, this is a space filled with solid jelly equal to four hill giants in a huddle. Really, it's more a surging obstacle than a monster you can trade blows with. And the trouble doesn't stop when you kill it: the cube should spread proportionately,creating a 6 foot high mound of jelly spread over 20 feet of corridor. Jelly that for a while will retain its paralytic qualities. As you clear it, more slumps to the floor. The players had to spend a long time clearing it to the side, during which some wandering boring beetles appeared, but lost resolve as the party pushed the gel forward at them. (Yes, the paralytic mass has some potential as a short-duration weapon.)

Below is a write-up that shows-not-tells the other observations and innovations I had after the encounter. You'll see that I reject the traditional increased chance of surprise in favor of more descriptive factors that give it an edge, in line with the more situation-based way I handle first moves in combat.

This mass of transparent, semi-rigid jelly by preference takes the form of a 10' cube, but can squeeze itself by 50% in any single dimension with corresponding elongation, if needs be. It may have been created long ago to clean the corridors of some underground complex, but along the way has picked up some antisocial habits.

The cube sweeps up and digests organic and siliceous matter: flesh and bone quickly, wood and stone more slowly, but cannot process metal. Owing to its composition it is particularly fond of bone and can smell it at 100', flesh at 30'; in other respects it moves blindly.

The gelatin is translucent, and so virtually invisible if a light source is not within 20' to reflect off its surface. This is not the case if it is carrying partially digested debris (10% chance), metal debris (10%), or metallic treasure (5%), all of which will appear to be floating in the air.

It attacks by surging forward suddenly in one direction. Any creature within melee range takes an attack. A hit means partial engulfment by the gel and its secretions that are both corrosive and paralytic. A failed save on a hit means the creature is paralyzed for d6 turns if human-sized or smaller, rounds if larger. Creatures that do not fall back are engulfed if the cube moves over them; they are automatically paralyzed, take damage each round, and in any case will suffocate to death in a number of six-second rounds equal to their CON score. Digestion is a matter of minutes.

The cube cannot be harmed by blunt weapons, lightning, or cold, and has the immunities of the mindless. Piercing weapons do a maximum of 1 point of damage. Slashing weapons do full damage, the best way to kill a cube being to slice pieces off it. Even on a miss a slashing weapon will scratch the barn-like surface of the cube for 1 point. However, if the cube moves over its sliced pieces it will start to reabsorb them, regaining 1 lost hit point a round. Even with a slashing polearm, which gives immunity to the cube's melee attack, it can take a very long time to kill a cube this way, while it presses forward at 30' a round. Escaping a cube can be as easy as running or ducking into a small door, but dead ends can be fatal.

Fire harms it for full damage with no saving throw, in the manner of an egg white, the "cooked" pieces sloughing off. After it is dead, the cube will subside into a formidable pile of jelly 6' high and 20' diameter, slowly turning cloudy gray. The gel loses its corrosive and paralytic properties after death, to a depth of 1' from contact with air.
Posted by Roger G-S at 07:54 2 comments: