Can there be a more futile project than setting up a system of analog rules as a totality? Testimony to this failure is the recurring meme of Murphy's Rules (Kovalic, forums, etc.) 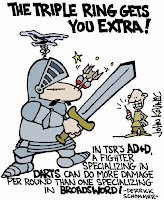 Actually, the changing content of Murphy's Rules over the decades is telling. In the 90's, there were plenty of yucks to be had from the crude, often clueless assumptions of older D&D rules - the 1 1/2 ounce gold piece, darts doing more average damage per round than a sword, and so on.

This mockery led to the "solution": Wizards of the Coast D&D, torn down and rebuilt from the ground up to be realistic and systematic. Monsters playing by the same rules as characters. Universal systems for fighting, breaking, building, crafting, moving and persuading. An end to Murphy's Rules, right?

Wrong. An end to the charming Murphs of yore, and a beginning to the kind of rules abuses like "Line of sight you say? I can get line of sight to the Moon with this spell and graffiti it with my wizard mark!" (Disclaimer: I once saw the Something Awful forum thread that went on for page after epic page with world- and universe-destroying abuses like that, but I have no idea how to get back there without an account, and don't click the link unless you have one.)

To be fair, every edition of D&D has contained a way out for the DM, a big red fiat button to push if the rules corner you into an absurd judgment. But the more rules there are, the more authority the rulebook seems to usurp. The best way to tell people not to apply a rule stupidly is not to write it down in the first place.

I'm not sure where the tipping point is between accepting common-sense rulings and relying on the flawed totality of the rulebooks, but a critical point has to be when you extend the adventure game rules system beyond "exceptional actions in a limited scope." In its overgrasp to rule over every aspect of existence ... to make your walk to the store to buy eggs a DC5 skill check ... to give a Constitution score to a horse and a Size class to a mountain ... the totalizing rule system sets itself up for humiliation, exploitation and failure.

Here is a great example of the kind of "Murphy's Rules" we could use more of, from the old days, and illustrated by Ben Sargent: 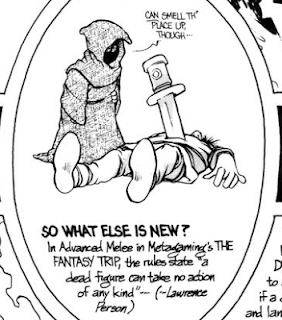 Mocking the rule that states the obvious is a bracing smack to the kind of player who looks to exploit the rules precisely because they have no rule that states the obvious. Or to put it another way: if the rules protect you from the arbitrary whims of the hypothetical unfair, callous DM who must haunt designers' nightmares ... who protects you from the rules?
Posted by Roger G-S at 12:30