While researching my folk saints I came across a most intriguing real-world figure, the legendary, uncanonized Santo Amaro. 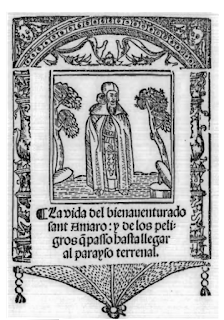 This blessed wanderer set sail from the land of Alia, "whose cities now lie in ruins," searching for the terrestrial Paradise, convinced it lay across the oceans - he is assumed to have sailed west, although the direction of travel is not always clear from the manuscripts. He gathered a crew (could YOUR PARTY be that crew?) and set forth into uncharted waters, guided only by faith.

The Spanish texts of his adventures (available here, at the end of the monograph) bear a certain resemblance to themes in pagan Celtic literature of the journey across the western ocean to the Otherworld (imramm) and to the similar legend of St. Brendan the Navigator from Irish Christendom. C.S. Lewis (who was Northern Irish) may indeed have drawn on these tales of curious islands, moral lessons and marine perils for his Narnia book, The Voyage of the Dawn Treader.

Amaro's encounters, to the gaming mind, look like the kernel of a saltcrawl map.

1. Tierra Desierta, island of five cities and many castles, where the men are ugly and the women beautiful. Abundant animal encounters. Provisioning and trade available. Handsome male party members are at risk of entanglements, jealousy.

2. The Ruddy, or Vermilion Sea.

3.  Fuente Clara, island of many sins and vices, but where everyone is beautiful and courteous, disease is unknown and the lifespan is 300 years. Henchmen and hirelings must make a loyalty check or remain in this false paradise.

4.  The Coagulated Sea traps the ship among seven other abandoned ships, where fierce sea monsters the size of horses and larger fight over the corpses of the ships' crew. (Inspired by prayer, Amaro escaped this deathtrap by inflating waterskins with air and tying them to the ship, whereupon the beasts attacked the waterskins, believing them to be corpses, and pulled the ship out of the clotted waters.)

5. Ysla Desierta, bare of growth, overrun by fierce lions and populated by hermits, a fortified abbey with basic supplies. Each Saint John's Day the lions and other fierce beasts fight and the stench of the resulting corpses is such that anyone staying on the island for up to a month afterward is sickened.

6. Further on the monastery Val de Flores, in an abundant land with rich supplies. The leader of Val de Flores is a friar, Leonatis, whom the local savage lions respect.

7. The Port of Three Houses, a rich and beautiful land but without inhabitants and the port with no more than three houses.

8. The two hermits in the valley beyond do not know where the Earthly Paradise is, nor do the high-born women of the convent Flor de Dueñas.  but the wandering holy woman Baralides does, who only appears to the virtuous. She can give directions to the gem-encrusted castle gates of Paradise.

9. Paradise: whose porter allows a timeless glimpse of that land (Amaro spent 277 years gazing without realizing it) and gives as a gift the fruit (complete healing) or the earth (a tree planted in it will give fruit as healing potions) from the trees of paradise. You want to pry some of the gems loose? I double dare you to try...

Amaro's voyage is short, however, compared to the wilder adventures of St. Brendan, which curiously manage to cover some of the same ground. Maybe a Greater Neo-Imramm Western Sea map is in the offing?
Posted by Roger G-S at 20:30