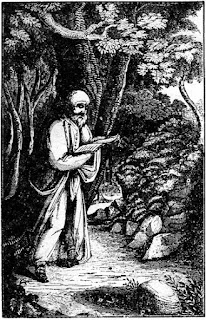 The holy lands of the Inviolacy have attracted and encouraged a roster of religious eccentrics. Abandoning comfort and hygiene, they dispense wisdom from sylvan retreats. Here are three of the most notable.

Renouncing his name, this venerable fellow set to climb the most secluded oak in the park of the bustling city of Schiecchi. He has been there so many years that he could not leave if he wanted, because his beard has become entangled in the leaves and branches of the tree; his garment is simply this self-same beard, augmented by dead leaves and acorns. Birds and squirrels bring his meager provender. He is a beloved treasure of the town, and especially valued when the affairs so often consummated in the leafy lanes of the park bring unwanted complications.

Advises the laity on: Practical matters, the lovelorn, the casting off of passions.
Weakness: Greatly craves any verbal description of food and drink.

Reasoning that solitude is an even more meaningful devotion when practiced in the company of another, these two men - alias "Destra" and "Sinistra" - decided to join forces, sharing the same cavern two miles outside the metropolis of Fanguillia, but refusing to acknowledge each other's existence. They receive visitors in a glade, where they sit on opposite sides of the same stump. Their devotion is reinforced by the braiding together of their beards, which have reached a prodigious length.

A small devotional industry has sprung up around the Two Hermits; pilgrims must pay 2 silver pieces in the chapel of St. Sylvain in the Fanguillia cathedral for an oak leaf badge for the journey, then a consulting fee of 5 silver on arrival, and a further fee of 2 silver to replace their oak leaf with the twig rood indicating successful pilgrimage. Furthermore, a great variety of refreshments, religious figurines, medallions, scapulars, unguents, lamps, candles and candelabra are on sale from a spacious shack outside their grove. Based on these proceeds, their forms avoid any suggestion of haggardness, and their garments, while plain, are never shabby.

Advise the laity on: Visions suggesting what to do next, especially for those who feel they have missed something obvious, with a touch of homespun pragmatism (Destra) or tough love (Sinestra).
Weakness: They have grown to hate each other and will not pass up the opportunity to make some pointed comment, which the other must pretend not to hear.

The Duke of Santilena, having enclosed and ornamented a spacious pleasure garden with flora, wildlife, and picturesque ruins brought in from every corner of the Middle Sea, found lacking from this romantic idyll only a wise old hermit. Being more comfortable with the mystique of faith than its uncomfortable restrictions, he advertised around the town for a desperate young man of the laity who would be contracted to grow out beard and nails, dwell in a hut on the premises, and offer pithy aphorisms to visitors. The cleverest of the applicants, one Neppo, was hired on the spot and took the holy name Tithonus.

This ornamental hermit, however, came to inhabit his role so seriously that he underwent a religious conversion. Subtly tinging his advice with barbed remarks about the Duke's dissolute ways, Tithonus eventually forced a confrontation, from which he emerged victorious. The Duke bequeathed the estate and duchy to Tithonus, and went on a penitent's pilgrimage to the Axis Mundi, from which he never returned.

Tithonus now rules the Duchy in sobriety, chastity, and benevolence, although most of his day is spent in conference with bailiffs and administrators. He has hired the wastrel youngest son of a declining line as an ornamental Duke, to dwell in the palace, excite gossip, and in general furnish the bad example that Tithonus' sermons need.

Advises the laity on: Matters requiring justice and discretion.
Weakness: Is losing his connection to the Almighty with so much hustle and bustle around; feels the need to get away for a while.
Posted by Roger G-S at 12:18