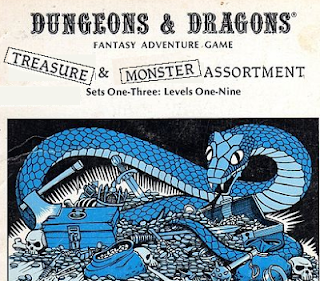 In most adventure design methods I have seen, treasure placement is kind of an afterthought. The perils and creatures come first, and then the treasure is placed more or less methodically according to what is guarding it. Or, you place your dangers and then you ration out how much treasure the level will contain, in dribs and drabs here and there, with an all-important number in mind ... let's say, 5 party members at 2000 xp each to get to second level ... yup, clearing this dungeon level should get them there.

Now, if the party never catch on to the idea that their treasure is being handed out like a paycheck, that's fine. But as a DM I like to be surprised by my own creations. Rolling things randomly while stocking an adventure site is a big part of that. The random comes first, the sense comes after, and more often than not the gain to be had in creativity is immense.

I wanted to break out of this thinking with the treasure table I posted last week. Here is a revised version, with hopefully greater clarity, as some people had trouble understanding it at the first sight:

The idea with this treasure table is: each trove is its own thing. It could be a pittance, or a bank-breaking amount. There is an upper limit on each trove, because you want some control over huge hauls, but in my system it's a pretty big upper limit (characters need only 1000 xp to make 2nd level, so two maximum level hauls - you stop rolling once you hit or exceed 2000 x current "depth," or dungeon level - will get them most or all of the way there. However, the average value of hauls at depth 1 is about 500, so the average party will level from about 10 of them, or if there are other ways to get experience that are roughly balanced with treasure, about 5.

And not all treasure will leave the dungeon. Some of it will be unwieldy, requiring a laborious extraction. The matrix of value vs. weight pretty much sees to that (200 weight of fine quality wood anyone?)  Some of it will be hidden or just never found. Coins, in this table, are not all that common, so transporting and selling the treasure will be the norm. The more variables there are, the more adventure feels like adventure, and less like drawing a paycheck.

Let me break out the Lovecraftian italics for this manifesto:

If you are trying to create a sense of wonder, danger and adventure in your players, while you yourself know that you have scripted out the adventures with carefully level-balanced encounters and rewards ... while you may entertain the players, something will be lacking for yourself.

Having rolled, and possibly surprised yourself, why not then build the adventure around the treasure, instead of the treasure around the adventure? Create the hazards and monsters more or less proportional to each trove, with some having no treasure at all but guarding key points - in effect, giving access to later treasures. I'll give an example, next post.
Posted by Roger G-S at 18:54