News of Jack Vance's passing, a few days delayed, is now hitting the old-school gaming sphere. Although I could wax in already-waxed ways about his fantasy, his science fiction, or for the n-teenth time about the vision of magic in his Dying Earth novels, there's a less obvious way his fiction has influenced the world of my campaign games. 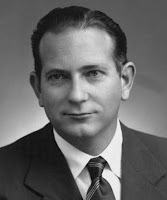 In whatever genre, Vance's fantastic fiction excelled in the creation of a specific kind of society which I'll call the Vanceburg. Assembling some elements from Robin Laws' analysis of Vance's fictional elements in the Dying Earth roleplaying game, the Vanceburg merges "Strange Customs" with a "Crafty Swindle." Specifically:

Vanceburgs from the Dying Earth novels are legion, but include the gruesome ponzi scheme of the rat-men; the town of Vull, where Cugel is set on watch for Magnatz; and Master Twango's scale mining operation. The Planet of Adventure series arguably describes a series of Vanceburgs, from society-scale to the intimate scam of the eel-race at the end of Chasch. In Lyonesse, one is reminded of fish dishes sold at a "seasonal price."

In my own game, the memorable Vanceburg was the far northern town of Parmentell, peopled by bluff merchant factors  and evasive townsfolk, and dominated by a secretive citadel. The authorities' constant fees, levies, regulations and imprecations lent a Vancian air to the proceedings. The town billed itself as a prime base for adventuring parties to hunt the secret stores of purple worm ivory and even the Purple Worm Graveyard itself, scattering maps throughout the realms.

In reality, few adventuring parties found any ivory, but their activities concealed the actual source of the town's wealth, for the Graveyard itself lay underneath the citadel. The mysterious ceremonies were actually farewells to desperate citizens daring to descend to this vast cavern, which promised unimaginable wealth but also speedy death at the hands of lesser worm guardians and worse. Thus, a double-tiered Burg, with the townsfolk persuaded that their knowledge of the truth and chance at upward mobility gave them an advantage over the visiting rubes.

While the Vanceburg is at high risk of being overturned in one way or another by its perceptive visitors - and my campaign was no exception - I should also mention an inversion-variation on the theme that sometimes pops up in the Vance corpus. In this concept, the inhabitants of a place have themselves become deluded by their own myth, and so ripe for upending, exploitation, or outright robbery by the canny interloper. Shining examples are the villagers of Smolod who lived in the paradise granted them by the cusps of the Overlord, or the pilgrims of Gilfig on whom Cugel practiced a memorable deception. The Burgvance, perhaps?

Although I've shied away from this kind of adventure plot because it seems too easy, I'm sure it could be put to work, with the primary risk being the awakening of the inhabitants themselves ... Perhaps this is a good way to tone down the threat of monsters stronger than the party can defeat toe to toe. Imagine a society of hallucinating minotaurs, or a revival tent meeting of altruistically deluded mind flayers?