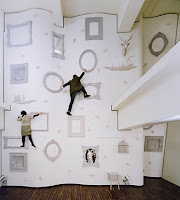 Nonviolence in an adventure can also flow naturally from the challenges it puts forth. Traps, tricks, and problems are all challenges that don't require hurting or killing to get past, but can be just as deadly and exciting as combat.

To expand on a very early post from this blog:

Traps (and related things like locks or bars) are challenges that admit one solution. The first part of the challenge is detecting the trap. After that, there is usually only one way to deal with the trap, which can be abstracted to a dice roll, or turned into more of a puzzle with a description of the trap's mechanics.

Tricks are usually more obvious to spot than traps, but less obvious to solve. Often the players must figure out what should be done to solve the trick. Often there are numerous different things that can be done, with beneficial, harmful or informative outcomes.

Puzzles are tricks with one solution and one outcome, usually beneficial.

Problems are the most open-ended situations. These are situations where a goal can be reached by a number of different means, including some that may not have occurred to the adventure designer. Examples are fording a flooded river, crossing a constantly geysering cavern on chain-swinging wooden disks, finding a way to attend the Countess' exclusive masked ball.

In this post I'm going to present a simple system to get creativity working on problems. This will be followed soon by the #2 request in my poll - the system to generate tricks and creative traps.

The system for problems - "Bag of Problems" - gives a random listing of non-combat challenges that might be faced in an adventure and some of the complications that might make dealing with these challenges more interesting. It's a one page pdf up on Google Docs. I give one example with it, and more will be forthcoming in future posts - specifically, I'm going to use it to create a nonviolent adventure, "Egg of the Gazolba." As always, let me know if you have any problems downloading it and what you think.

Here's the example on the sheet, as a taste of a creative departure from the kind of simple sketch the table gives. These remind me a little of the folklore motifs from Stith Thompson's book - itself a great source for fantasy game ideas. In both cases I like how a full story can be created from a simple phrase.


Statue - change appearance of: A massive statue lies toppled athwart a passage further on. Although the original paints have faded, its eyes seem to have a vivid shade of green, its nose is broken off, and its gaze is directed at the statue guarding the other side of the passage, identical in all respects except its eyes are normal and its nose is intact. The green eyes are a clue that the statue is jealous of its twin. If the two are brought equal – either by disfiguring the standing statue, or by embellishing the fallen one – the fallen statue will roll aside, opening the passageway. Brute force is also a possibility, though the fallen statue will take the strength of 20 men to move.
Posted by Roger G-S at 23:33