Everywhere from the Zork logo to Hirst Arts adventure scenery, the standard architecture of a "dungeon" - meaning, underground medieval fantasy adventure setting - is:


It's shorthand for our conception of what a fiendish antique maze stretching many, many levels underground would look like. But what does it really represent?

Certainly, high medieval castle architecture used those big stone blocks for aboveground walls, as we see from Alnwick Castle in Northumberland and similar fortresses. When delving into earth, it might also be a good idea to reinforce the walls with stone, right? Except if the idea is just to reinforce and insulate and make it look neat and nice, then your typical medieval cellar made do with much smaller, brick-like stonework, as seen in this undercroft in Norwich. 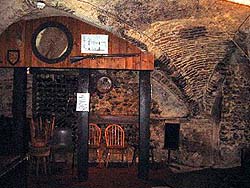 Another problem for the "dungeon look" comes when, digging down, you hit bedrock. Granted, in agricultural plains this might not happen for a hundred feet or so, but castles, wizards' towers, and other such dungeon-toppers tend to be built on hills with rock not far below. In that case the dungeon tunnels are best dug directly into the rock, faced and decorated by planing the rock itself. There's no need to emulate the look of Garden State Brickface by carving fake mortar crannies into the stone.

Could it just be that the big-block idea comes from artists who wanted to draw fewer lines in their medieval settings? Maybe, but there's another reason an architect might want to divert those hard-to-move, yard-long stone blocks from building the important castle walls to facing the underground cellars.

If you are keeping prisoners down there - you know, in your dungeon - then it's important to make the blocks big, so it's hard to get past them to the diggable clay beyond.