Following up the previous post, let's take history forward from the 1970's to now. In comparing the old controversy about the nudity in D&D art with more recent controversies about sexualization in D&D art, a few signal differences emerge.

The naked or topless females in OD&D and AD&D are mostly monsters, demons, or goddesses, like the harpy from last time or the memorable Loviatar. There's a certain amount of "realism" behind the nudity - how ridiculous does this foul carrion bird from 4th edition look in a smock? 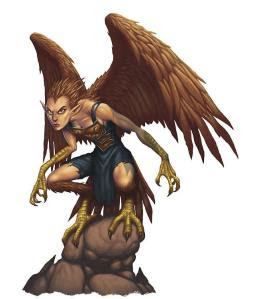 Yes, she eats rotten flesh, befouls the food of others, lures men to their graves, but her only crime against decorum is daring to wear a brown breastplate with a blue skirt. (At the same time, it is notable that a lot of opportunities for male monster-nudity get passed over in those books, unlike the equal opportunity monsters of the present-day Otherworld miniatures line.)

But isn't it odd that the female adventurer pictures in old D&D are mostly reasonably clad and mostly not sexualized? 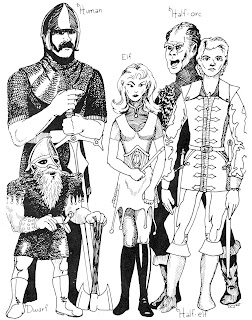 I have to grin a little because this generalization is based on a grand total of two female adventurers depicted in the 1st edition AD&D player handbook, and one more inside the DM Guide (though her and her party's adventures take up several illustrations). And feel free to point out the glaring exception: the metal-bikini Fay Wray on the DMG's cover.

I am reminded of Roland Barthes' essay which begins, "Striptease--at least Parisian striptease--is based on a contradiction: Woman is desexualized at the very moment when she is stripped naked." Eve, nude, has the possibility of being innocent; Eve, in pasties and G-string (or costumed with a cleavage window and thigh slits), does not. The covering of nipples and pubis satisfies the letter of the obscenity law, but sexuality is not a mere matter of obscenity. Going back to the infamous succubus from the AD&D Monster Manual, what's striking in light of adolescent memories is how covered up she actually is, by hair and pose and strategically placed limbs: 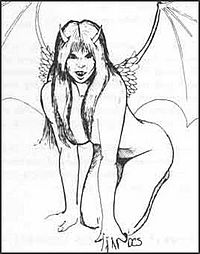 Can you really say Pathfinder's present-day iconic character, Seoni, is much more covered up (except by tattoo ink)? 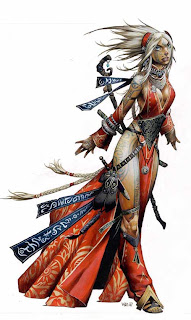 And those leggings and bustle/skirt/train call to mind Barthes' observation: "The end of the striptease is[...]  to signify, through the shedding of an incongruous and artificial clothing, nakedness as a natural vesture of woman, which amounts in the end to regaining a perfectly chaste state of the flesh." Except we never get to the innocent state of nudity here. Yes, we have many more female characters now than in AD&D1, but when so many of them look like this (and almost no male characters look like Riker in "Angel One"), is this really progress?


Next and last post in the series: What these issues mean to players today, and why the endless three-way flame war over sex, gender and art can be reduced to false premises.
Posted by Roger G-S at 12:00