Guerrilla goblins are all very well but surely you can't realistically have wolves, bears, and giant rats running around with complicated traps, tactics and outflanking maneuvers?

Well, no. But with a little common-sense tweaking of the standard D&D combat system, even the most straightforward creature can become an exciting, terrifying combat threat.

The key is close combat. It was Steve Jackson's micro-game Melee - precursor of the GURPS system, and an elegant, d6-based simulation of skirmish combat in its own right - that introduced the rule that two figures could occupy the same space and be locked in close combat, where most long weapons were useless. A less drastic version of this idea for D&D can be found in Ronald Hall's initiative system - someone locked in close combat with an unsuitable weapon would only lose initiative, but still attack normally. 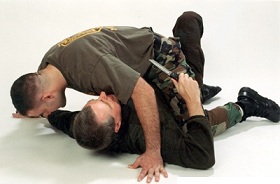 To refresh, here's my application of the idea in my own close combat rules: 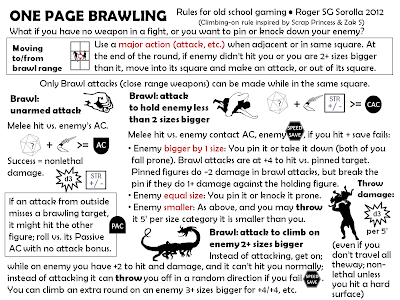 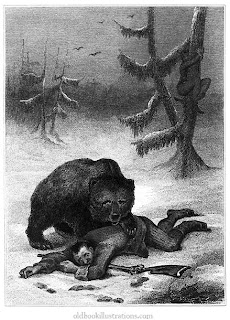 The thing is, I don't use these rules as a DM to their full extent. I probably should, but I've had a soft spot for my players until now. I originally put them in to make players consider taking a variety of weapons - dagger or short sword for close combat, for example. But as dangerous as a guy with a knife in a brawl is, an animal with teeth and claws is much, much worse.

A wolf is coming at you. To close, it has to not get hit by your attack, and then it's in there with you. It may even go for the "attack to hold" option in order to knock you down. And when you're on the ground under a predator, you're in a bad way. Your best weapons are useless and its best weapons are in prime working order. If your friends try to help you, they risk hurting you instead.

Things get worse when outnumbered or outflanked. In my system, you can only fend off something advancing to close range if you can hit it. If one wolf engaged you from the front while another attacks from the side or back, you will be in close melee with them in short order. The same goes for spiders. monkeys and stirges dropping from overhead.

For even worse threat, make it so you can get in close without any problems if you're two or more sizes smaller as well as bigger. Giant rats suddenly don't look so pathetic when they're under-running your front lines. If you don't kill them quick, they'll be hotfooting your wizard. Not to mention what happens when something really small decides to climb on you.

With not-so-dumb animals getting into the maneuver and positioning game this way, an attack by a bear or a pack of wolves turns from a toe-to-toe slog into a tense nightmare for players.

Next up: High level combat and why it's only boring in theory.