Experience for Ends, not Means

The other day noisms expressed some nostalgia for the 2nd Edition D&D experience rules, where characters got experience for doing things related to their class - fighters for killing monsters, thieves for getting treasure, magic-users for casting spells relevant to the adventure and so on. There were also some awards for playing well, in terms of role-playing, being a good party citizen, achieving story goals, and becoming a better tactician, although these were quite vaguely defined.

I remember greeting these changes with satisfaction back in the day - finally, an experience system that was more "realistic"! Plus, it rewarded playing in-class, and isn't that what 1st Edition aimed at doing but in a more clunky, ornery and punitive way, punishing magic-users who got into combat or fighters who shrank from it? 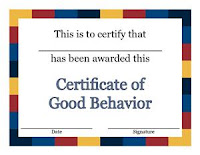 Nowadays, though, I have a different evaluation. I've realized that the 2nd Edition approach mostly rewards player skill directly, rather than allowing players to use their skill as they wish and rewarding the outcome of that.

In other words, it rewards the means rather than the end. I don't think this is a good thing. Let's look at each application of this.

* Rewarding class-consistent behavior. I have never really understood this. If your fighter is collecting magic wands and your magic-user is wading into combat, and that's not a good thing, surely a) this is the fault of the system for not emphasizing each class' strengths and weaknesses and b) this is a point of individuality of the character, rather than an affront against the divine order. If the party followed their bliss individually, surely the only time they would ever agree on a joint venture would be to kill a monster (fighter) guarding treasure (thief) whom the gods have decreed unholy (cleric) and can be hurt by spells (magic-user). The whole point of D&D is that diverse means are combined toward the same end, but if the means are rewarded, this splits the party's desires.

* Rewarding "good play." Again, shouldn't good play lead to success, and success be its own reward? I suspect that what's lurking behind this is a disavowal of certain means that lead to in-game success. "Wait no you can't take a barrel of creosote and 1000 nails and ... Argh no you must slay in man-ennobling combat! No points for you!" Forget plot railroading - this is play railroading. Or maybe you like the barrel trick. The point is that the DM gets to approve of the means, not the end, and this takes something away from the players.

* Story goals. Rewarding the achievement of some goal derived from the story, finally, is the only end-reward in this whole scheme. It's a decent enough end to reward, as long as you keep an open mind about what counts as a satisfying end of the story. Players should feel like they can change allegiances and priorities without any penalty other than those in the setting. Anything else is puppeteering.

Treating the party as a bunch of venal mercenaries who only get involved in intrigue if there's a reward - that's another "end," one more in line with the traditional approach. Rewarding progress in the social structure of the campaign, so treasure is mostly useful to buy yourself rank and friends, which you can also get by going on quests and missions ... that's a third "end" for a system. I'm still torn about which kind of ends to reward with the final version of my experience system. But more on that, later.
Posted by Roger G-S at 00:37