Considerations of the One-Shot Dungeon

Justin Alexander's blog posts about "Jaquaying the dungeon" are often cited in support of building non-linear pathways into an adventure location. I've found one case where things need to proceed a little differently, though: the one-shot adventure, meant to be played in the four hours or so allotted in a convention slot or a gaming club meeting, with no campaign following through. 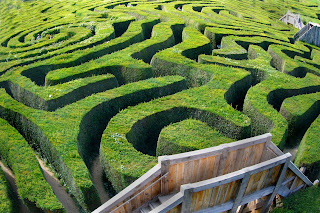 1. At most, you have four to eight chunks of significant interaction to work with before the adventure is over, which can be combats, exploration problems to overcome, or rooms that invite deep exploration.

2. It's desirable to have the party be able to reach some kind of goal or climax, with skillful play, by the end of the adventure. Note that "skillful play" part; I've seen DMs in tournament modules fudge dice rolls to help the party reach the end, but there has to be some sense of earning it, or the reward is hollow.

Thing is, the campaign has all the time in the world. If the party spends their four to eight chunks noodling around the insignificant halls of the dungeon, they can make it up next time. If they never reach the climax now, they can wait to reach it later. But if the one-shot party misses, they get no more chances. If they miss, it should be because of something they did, not because they took the wrong random turning somewhere. This suggests a couple of different approaches ...

White Pluming it. In the manner of TSR's S2, where a forking hallway early on leads the party into one of three mostly self-contained adventure paths. There's something not quite satisfying about this. I mean, they might as well have been going through the wilderness and choosing between separate adventures.

Jaquaying with signposts. The dungeon architecture is porous, but clues lead the players to the climactic area or areas, with distractions to tempt the unwary. This could work.

Forget Jaquaying. Does the sense of player choice have to come from changes in the direction of travel? Could it be choosing instead what to try, what to look into, what to disturb and what not to, what to take and what to leave? Although Hidden Shrine of Tamoachan is sometimes lambasted as a "railroad," its design is really a sensible choice for a one-shot tournament module. The players really have to think about what to get involved with and what to leave alone; just as time is the players' ally in letting them stretch their exploration across the sessions of an extended campaign, it's their enemy in the one-shot, which can add to the challenge instead of subtracting.

Next post: The experience that sparked these musings - running The Lichway after midnight at GenCon!