Junji Ito is a manga artist you may know through the widespread dissemination of his horror piece, Enigma of Amigara Fault; the one where an earthquake exposes many human-shaped holes in a cliff face. 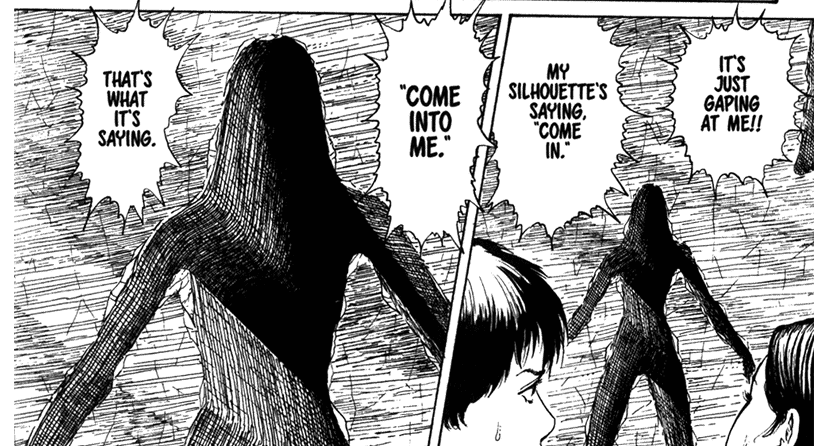 That story is one of his best and also a fair representation of his method in general. Ito specializes in presenting situations at the far edge of plausibility and driving them through to their halluci-logical conclusion. His illustration style, seemingly stuck in the late 80's for normal characters and scenes, opens up into meticulously stippled and hatched vistas when rendering abominations up close. As those who follow through to the end will see, body horror is his main theme, with occasional psycho-horror and ghost story digressions.

NOTE: Fan translations of many of his works are available online.

Although he sometimes traffics in monsters, his most compelling works are better seen as curses, documenting unnatural misfortunes and transformations of the once-normal body. After all, the monster can be straightforwardly fought; the curse confounds this impulse by tying the horror to a human person, deserving of our care. Sometimes literally, attempts to destroy the monster will destroy the person; a technique I picked up recently in running a semi-improvised game, where among other Boschian horrors, a monstrous fish gaped, disclosing a terrified victim imprisoned behind golden bars; what was done to the fish, happened also to the victim. 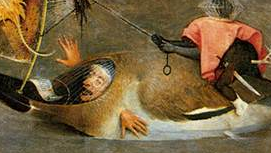 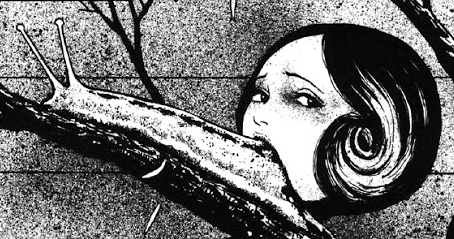 In this curse, the tongue grows thick over a period of several days, eventually transforming into an living but rooted swollen slug. An even more gruesome transformation is in store, in the manga a result of the parents' attempt to salt the slug-tongue out, but in a game it can happen naturally: the body withers away, leaving the slug to pull along the still conscious head.

The curse is contagious; coming upon a nest of heads and skulls with fat, pink, living tongues, under no circumstance must they be allowed to slime open, uninfected flesh.

The curse in Red Turtleneck is also, more directly, about the head.

By wrapping a hair around the victim's neck, or tricking them into wearing an object around the neck with the magically treated hair inside, the head detaches from the body by an imperceptibly thin cut. It must be held on rigidly to have any hope of being healed. The manga story itself gets unbearably silly about two thirds of the way through but the basic idea is gripping. For best effect make it unclear whether the curse is real or a delusion, complete with psychosomatic bleeding around the neck.

Ito's masterwork of body horror is the long-form Uzumaki, a suite of increasingly connected variations on the horrific potential of spirals. Various victims: become rolled up like a Swiss roll in cross-section; sprout grotesque warts like a unicorn's horn; grow an inward-spiraling mark on the forehead that consumes more and more; grow a spiral mark on the back that humps outward, transforming them into a giant snail; get rubbery limbs that twist like snakes mating; and the best curse of all, the curse of outlandish spiral hairdos that grant medusa-like shock and awe and hypnosis and choking and grabbiness at the cost of major Constitution drain and the hair getting ideas of its own ... 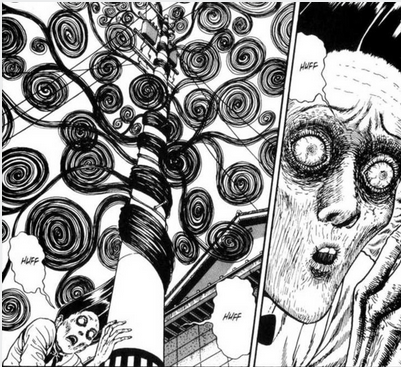 And variations in counterpoint; like the woman early on who becomes terrified of the natural spirals of her body; or the way the environment expresses the spiral curse, with air, water, earth and the town itself succumbing to vorticist force and form.

With one final idea for gaming: the shape as theme for an adventure, cult or region. The spiral expressed in an array of spiral jewelry, sphincter-like doors and pits, spring-loaded traps, flail snails, air elementals, curling snakes and worms, morkoth labyrinths, hypnotic patterns, maze spells.

The triangle, the zigzag ... the disk. 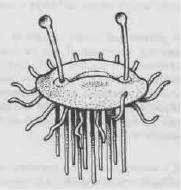 Next: Junji Ito's psycho-social horror.
Posted by Roger G-S at 01:00