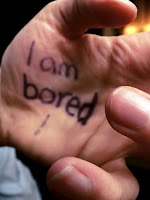 This rule give s a character the potential - if very lucky - to get back into the fight almost immediately. More importantly, it gives hope and something to do in what is otherwise a deadly boring situation.
Posted by Roger G-S at 16:10