The Black Tower (Guinasso & Abrams, 1981) is not to be confused with Dark Tower or any other low-albedo third-party edifice from the early days of D&D. It was a product of Midkemia Press, material from a campaign that inspired Raymond Feist's Magician series of novels, one of many gaming-fiction backcrossings to come. You can get a pdf of it here, although I'm pretty sure the typesetting is not the original. 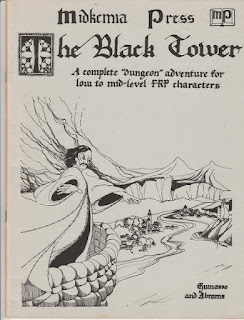 We have here 100+ rooms of evil wizard's castle, with a number of fairly interesting tricks and characters, and a large cast of unique Midkemian monsters living in close tenancy -- screamers, hard luck "snagers" (indistinguishable from doors!), fuzzy pests, goldmoths (indistinguishable from gold pieces!), etc. All are statted out in conformity with THE TOME OF MIDKEMIA fantasy roleplaying game. This game, never published, works with "hits to kill", levels, d20 to hit rolls, damage done with various dice sizes, and spells of familiar stamp with flavor words tacked on like dishes from a gastropub menu (MATCHLESS SLEEP, UNALTERABLE QUEST, THROW LIGHTNING).

But the most interesting thing about TTOM is its attack matrix, reproduced in the module. 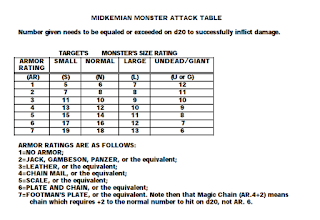 This matrix actually earns its pay - unlike the frankly boring matrices from (A)D&D, based on monotonic effects of attacker's level and defender's AC, with a few quirks that were not memorable or justifiable enough to survive being simplified into THAC0 and eventually done away with. Here, though, armor counts for markedly less the larger the attacker is, and is even a liability against huge creatures and undead. Why? Read on! 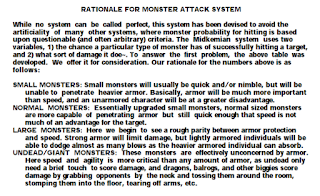 This simplifies the effects sought by a system like Runequest/BRP or GURPS, in which defensive skill reduces chances to hit while armor reduces damage directly. A similar effect might be had by having large creatures deal massive damage that armor does little to reduce, while the chances to hit are based on relative size, with smaller and more mobile creatures being stymied by strong armor but having the upper hand on both attack and defense.

Now, an advantage of Midkemia's matrix presentation, compared to those other rules possibilities, is that it makes choices transparent. Instead of fiddling with spreadsheets to try and figure out the optimal damage dealing and evasion per round, Midkemia's matrix shouts loud and clear that there is a role for your Frazetta-style fighter just as there is a role for your buttoned-up plate tank -- and the scarier the monster, the nakeder the hero!

Heartbreaker rules are the Burgess Shale of roleplaying -- collectively, a lode of stillborn ideas that might have been. The Midkemia matrix points a way, not taken, for the core mechanic of the game to escape the tedious bonus-and-target escalation spiral already visible in AD&D and reaching a peak in 3rd edition. Instead of high-level play just being a bigger-numbers version of low-level, fighting huge monsters is essentially different, shifting to a table that reverses the logic of armor and requires no further bonus pumping to make for interesting play.

The same impulse underlies more recent rules ideas that recognize, for example, that you can't kill a tyrannosaurus by whaling on its shins with a dagger, and that going toe-to-toe with a giant shark-elephant centaur is not just a matter of hit and miss. Instead of 5th edition's "bounded rationality" approach, which deals with the treadmill by cutting it short at the end, we can call these qualitative shifts in power level "unbounded rationality." They deal with the treadmill by making it a conveyor belt to somewhere new and strange.