For gaming campaigns that aim for weirdness, whimsy ...

or simply things that kids can hack and slash at without too much moral injury ...

let's imagine some of the standard humanoids as semi-sentient plant creatures. 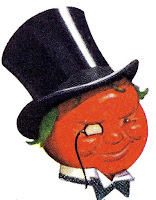 Unclothed, they appear as limbs and torso of tightly coiled, hairy green vines, surrounding fruity inner organs and supporting a bulbous head with pointy ears and an evil little face that -- according to the goblin's age -- is green, yellow, orange, or lighter and deeper shades of red. They give off a characteristic sharp green smell.

They are usually wrapped in cast-off pieces of clothing and armor, armed with sharp spear-sticks for poking and throwing.

When one is fatally squashed, pulp and seeds spatter everywhere, and if allowed to grow, one seed equals one future goblin.

The existence of these creatures is one reason tomatoes are feared. Adding to this reputation, a tomato goblin will on rare occasions become infected with green, horned, noxious worms (treat as the worms of a Son of Kyuss).

These larger creatures are built and scented similarly to tomato goblins, but their vines are more yellow, their heads and organs various hues, some a very deep purple, some mottled with ivory white, some fully albino. Their age can be seen from the head and jaw, the young rounded and egg-shaped, the older more elongated.

These "aubgoblins" are less impulsive and more strategic than their tomato cousins, but speak the same Nightshade language. Their heads are packed densely with spongy, pale matter, within which a few dozen seeds can spawn new aubgoblins if the old one falls. Human-sized, they take care to select the best martial equipment from battlefields they loot, and usually have at least medium armor and 1-3 weapons including a shield. 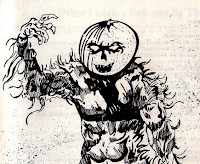 Their tall, rangy bodies covered in dark green leafy hair, vegetable bugbears sport a broad, squat, orange gourd on their shoulders. Born blind and faceless on the vine, their rite of maturity has them carve their own features into the pumpkin, letting out the inner, flickering glow of a corrupted soul. They move in absolute silence, and can dim their jack o'lantern light to firefly brightness when they don't wish to shine in the dark.

Stealing material from farms to clothe and arm themselves, they wear burlap sacking, tarpaulin canvas, pot-helm and pan-lid armor, all tied on with frayed rope. Their preferred weapon is a heavy piece of log with pounded spikes, bolts, or an embedded plowshare at the business end.

Having no seeds with which to reproduce, bugbears clip and plant grafted vine segments from their bodies that new ones may grow. Their penchant for stealing and frightening human children may stem from the inadequacy of their family life.