It's been 17 months of playing with various forms of my 52 Pages rules, including a continuous campaign and over a dozen pick-up sessions, working with character levels from 1 to 5.

In this infrequent series of posts I'm going to share my thoughts about what works and what doesn't in various aspects of the game. I'll also try and fit the classes into a crude kind of balance structure that can perhaps be exploited later on to create modular prestige and NPC classes, trying to resolve the prestige class conundrum I posed earlier in the week. We'll start out with Mr. Meat and Potatoes, the fighter.

As it should be - he has top-notch hit points (+2 on each die), starting attack, and is unrestricted in the armor he can wear and weapons he can use. Wizards gain special powers as they advance, and a little bit of extra fighting capacity; fighters gain fighting capacity as they advance, with a little bit of special powers. The saves are fairly weak, with an advantage over the zero-level +3/+5/+7 only in Body.

What about the powers I've been giving to fighters? 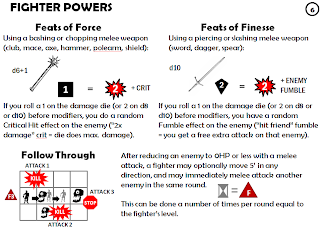 In actual play, the Follow Through rule has been a huge hit. Fighter players love getting another attack (really, the Arneson "chop 'n' drop" version of the AD&D rule that gave multiple attacks against low-level critters). It makes the players cheer. And all this despite the fact that if you hit half the time, and kill half the time, and hit again half the time for an average of 5 damage, the feat is only worth 5/8 extra damage per round.

Not so much the "force/finesse" thing. It's easy to forget, and sometimes the results are underwhelming. The scaling to die size is awkward. It's not really missed.

The fate of my feats, gained at odd levels, is also uneven. The players only seem to choose, appreciate, or even remember the feats that give them extra attacks. The feats occupy two whole pages, and it's hard to decide what a standard high-level NPC fighter should have on that basis. From which we can derive this awesomeness rule:

So for 52 Pages Basic 2.0 I'm removing feats, and giving fighters standard, more awesome-feeling bonuses at odd levels. It will be possible to customize classes by swapping out powers, which is part of the reason I want these kind of effects to be comparable in power.

At level 3, you get something that's in line with a Fighter: dependability, reliability, guaranteed damage based on extra dice. This is balanced more or less with follow-through: it gives about a half of a point extra damage per round.

At level 5, you get what turns out to be one extra attack every 5 rounds. In keeping with the reliable nature of the Fighter, this second chance attaches to low rolls rather than high.

It's the easiest thing, now, to switch out these bonuses and have them trigger off high rolls rather than low, for a swashbuckler rather than ol' dependable flavor. But at least there's now a basic-feeling standard to riff from, for this basic version of my game.
Posted by Roger G-S at 16:20