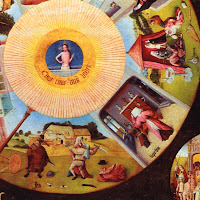 Continuing the account of how I tried to tempt players, characters, and NPCs on the last two Nights of the Devil ... the tale of Night the First.

1. Wrath.
The concept: Three erinyes, each armed with seven magic arrows of Wrath (Mind save or charge out to attack them), circle and shoot at the party. They at first used their illusion to masquerade as tempting ex-lovers of the penitent Diarmuid, but this was not done to excite his Lust, but his Wrath - right now he was feeling nothing but rage at the evil fay who had charmed him for year on year and drained over half his hit points.
The execution: As it turned out, the magic of the arrows did not exactly overwhelm the characters; only a couple of party members got hit once they got behind cover, and these were easily enough restrained. But the players! One of them got really, really mad at the whole situation - just taking incoming fire, not going to do a thing about it, not knowing if the DM had just set up a certain slow death situation! After cooler heads decided to stick it out some more, the erinyes ran out of arrows, fired a final salvo of the party's own shot arrows, and departed.
The verdict: Worked great as a player temptation. Magic arrows almost not necessary.

2. Avarice.
The concept: Seven bearded devils with magic sacks throw treasure at the party trying to get them to pick it up. For each one who succumbs to avarice, a devil may enter the magic circle and attack.
The execution: In practice this temptation was pretty obvious, so I had to step it up with numerous waves of treasure. Soon enough, the devils were throwing crowns that tried to land on people's heads, and snaky gold chains that dragged away pieces of equipment if they hit you. The last trick was for the bags to call out a large portion of coins from each character's purse. Now that hit them where they live! The self-same player who had succumbed to wrath now made to stomp on a fleeing gold piece, and thereby admitted one devil into the circle. The party defeated it in more or less short order, and the "temptation" paid off as that devil's sack, containing his stolen gold, got left behind ...
The verdict: Another great way to get under the skin of the players ... they're used to steering clear of treasure that looks to good to be true, but their materialism really shows when you start to take their stuff. I made all the treasure fake, but in hindsight it should have been real.

3. Envy.
The concept: Sixteen threads of ghostly, whispering letters, two for each person in the circle, come snaking in. If they get in your ear and you fail a save, they whisper envious words and make you attack another party member you have cause to envy.
The execution: Magic and silver weapons could fray and disperse the threads, but soon enough a large number of them were in threat range. A henchman and the dwarf succumbed. Cold holy water in the face allowed a repeat save, and the henchman rallied, but the dwarf did not, and he rushed and pummeled the lower-level fighter PC to whom the holy knights had given the devil-slaying sword, that cheesy noob! The brawling rules got a workout as the two ended up in the defensive ditch they'd dug.
The verdict: The actual challenge was not the toughest, but not knowing what the threads were and seeing them come from all sides made for a frightening experience, as did the possibility of turning the party against itself. I only later thought that maybe the players could be induced to feel envy if the threads redistributed experience points from one character to the other ... but how this feeling would lead to the characters committing the sin, exactly, remains to be seen.

I was also prepared for player skill to help break the threads - anyone who tried to think of ways their character was great, all right and really okay would resist them without a save. Maybe because the encounter played out as a combat rather than psychological challenge, this didn't occur to anyone.