Here's the current version of the rogue class in 52 Pages.

A rogue can shoot OK and fight using Dexterity. Speed save is the specialty, also boosted by high DEX. In skills, which depend on a d6 roll, the rogue starts with +1 in all except Knowledge, gains two instead of one skill points per level, and with a likely high Dexterity will get a further +1 on stealth and acrobatics.

As for the rogue's powers, what sort of combat role are they supposed to encourage? I suppose I would answer that the rogue is supposed to attack from back or side, rather than head on ... to use attacks from distance or from ambush as protection, rather than layers of metal armor ... to excel against a single opponent, rather than hewing through a horde like the fighter ... to be spontaneous and unpredictable instead of solid and reliable.

Looking back at how the rogue has played out (chiefly at the hands of my wife, who runs one in the main campaign), one of the abilities flatly fails at the above goals ... one is rarely used ... and the third works, but tends to lead to rules wrangling, so needs clarification. 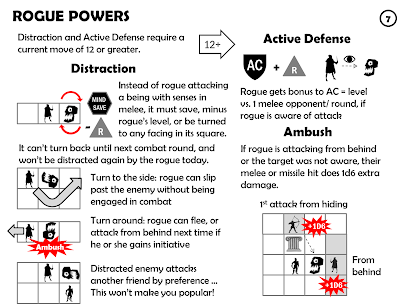 Distraction is the one that's rarely used. It's a neat idea but has just too many uses, and is unreliable.

Active Defense is the one that effectively gives the rogue plate mail at mid-levels. Very little is stopping such a character from becoming a front-line bruiser. The rogue should be afraid to get hit, not confident in fancy footwork toe-to-toe.

Ambush is strong, and in character for almost all the desired points - it rewards striking from hiding as well as circling around behind, is no good against an army, and adds an extra unpredictable die of random damage. The only problem is, I haven't been enforcing "from behind" consistently, instead leaving the impression that it works only if the opponent is totally oblivious of the rogue's existence. Another bit of uneasiness came from one incident where the rogue played whack-a-mole, ducking down and scooting around behind a single piece of cover in order to get the bonus repeatedly.

I guess my sense is that these features make the class too strong, in concert with the really high AC bonus. So let's look at the proposed improvement. 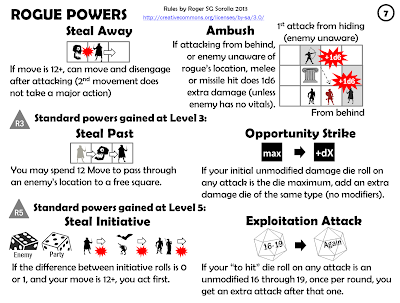 Now, you get two powers at each level to the fighter's one to compensate for a lower hit die, lighter weaponry, and slightly worse attack. One is a mobility power and the other a combat power. Steal Away's hit and run is crucial for early-level survival, while Ambush is the basic incentive to sneak and Steal Past. You can't really whack-a-mole any more - but you do get the honest backstab bonus as a reward for maneuvering.

The Opportunity Strike and Exploitation Attack are just versions of the new fighter's bonuses. They key off high numbers rather than low in keeping with the rogue's erratic nature, versus the fighter's reliable nature. They are slightly less useful in that they possibly can lead to overkill or a useless attack.
Posted by Roger G-S at 00:14