When I used to write poetry (that other, extinct hobby of mine that hewed closer to my twentysomething New York idea of adulthood) I ended up setting two rules for myself: Write concisely; avoid cliches. In hindsight I would have done well to add a third: The damn thing must still mean something. 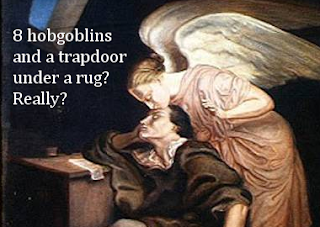 These laws work equally well for adventure writing. This genre, too, requires striking imagery to succeed; rewards going behind the scenes to find new connections and insights. And yes, the damn thing must still mean something - how you get there is your own concern, but imaginative fiction does not simply mean pulling six-legged animals named smeerps out of a hat and making them whistle Dixie. There has to be some evocative link to a consistent and rooted world, no matter how strange or oblique, to make it work.

I realized this connection after Zak S recently dicussed the legendary megadungeon disappointments, 3rd edition Castle Greyhawk and 2nd edition Undermountain. The former was shown up to be full of cliches and meaningless misses, the latter full of padding.

But besides mining the "gem" ideas from those clunkers, what would it take to make them more meaningful? Let's take a closer look at Old-School whipping boy Undermountain - specifically, the first room of the first level - then Old School Revival whipping boy Dwimmermount - three rooms from a page chosen at random. I can't get the image to size just right, so you're probably going to have to click to read it. 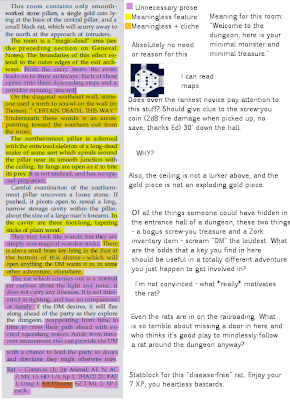 Even leaving out the boxed text, Ed Greenwood's Undermountain room 1 presents a no-fun-house of random features that lead nowhere and contribute nothing to the sense of gradual discovery through exploration. When the off-message and filler material is removed, we're left with a sly,mocking marker that this is the starting room of the weakest level: 1 rat, 1 gold piece, enjoy. The hidden compartment is actually a much better anticlimax if it's empty. A smart party will find ways to use it as a cache. Using this logic the DM can do a better job of figuring out what might actually, reasonably be cached there.

Speaking of rats and small change, let's give James Maliszewski's Dwimmermount more of a chance by looking at its deeper levels. For purpose of criticism, here are three rooms from the top of a randomly chosen page of the backer draft, which happens to be on level 5. Comments on the right. 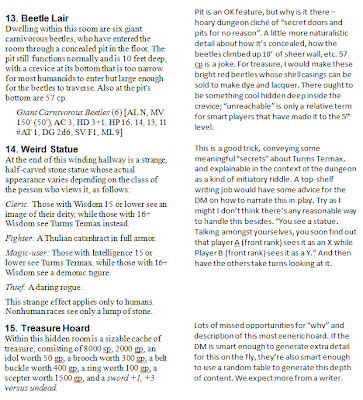 With Dwimmermount, there's better style but similar problems in substance: the prose is lots more economical, but meaning and unique twists still prove elusive, although they are there.

I think the main problem of both these and similar efforts is, well, that they're megadungeons. The amount of time required to put poetic craft into each and every one of a thousand or more rooms is practically impossible. Some corners inevitably have to be cut.

Greenwood did it by actually presenting only about 30 super-prolix rooms per level, filling the rest of the map with "do it yourself" maze wallpaper. Joe Bloch's Castle of the Mad Archmage is honest about having lots of super-short room descriptions but thrives on the set-pieces and the grand plan; it helps that he's intentionally recreating the gonzo-ish Greyhawk legend, which sets low expectations for coherence and dungeon cliche avoidance to begin with. Somehow we expect more of Dwimmermount, with its much-trumpeted world, story and secrets. I haven't gotten Barrowmaze yet, but have a thumbs up for Patrick Wetmore's Anomalous Subsurface Environment, which achieves its goals by using smaller (yet still expansive) megadungeon levels and a number of creative back-stories to sow meaning. Even that one, though, isn't complete yet.

Stonehell by Michael Curtis is another interesting case. I think that deserves a post all of its own.
Posted by Roger G-S at 12:45