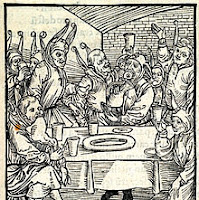 The concept: Six imp chefs, cooks and butlers throw dangerous and tasty food at the party and the penitent, trying to get everyone to succumb to gluttony, using their powers of suggestion (once per day).
The execution: Three "courses" were served.


The verdict: This was a funny episode but I didn't feel that the party was that threatened by it. In hindsight this should have been mostly about throwing suggestions on the hungry penitent and trying to get the food past the wall of bodyguards. The imps went down quickly in combat.

5. Lust.
The concept: This was a lone succubus. Hell didn't throw their all into this one because the penitent had pretty much had it with women.
The execution: I worked the epicene incubus/ succubus for camp, having it deliver cruel Freudian analyses of the player characters - who had mostly been lustless in the campaign, turning down opportunities for romance - before settling on the henchwoman Lintilla, who, shall we say, had not been without lust in the campaign. The party quickly shielded her from the succubus' charm ability and engaged it with missiles and melee before it could use its suggestion spell. A mighty lightning bolt from the cleric's magic amulet sent it reeling, and swords and silver arrows did the rest. On being sent hellwards, the creature briefly showed its true form: rather than a fabulous Aubrey Beardsley androgynous fashion model, the succubus was just an ordinary, plump, bright red Coop hot rod devil girl.
The verdict: Probably, getting hit shouldn't forestall monsters' spell-like abilities. Could have been tougher.

6. Sloth.
The concept: Three wraiths attack. Instead of draining levels, they drain movement points equal to the damage caused (d6). At less than 3 move, you cannot attack and at 0 move, you fall asleep.
The execution: Pretty straightforward, slug-em-out.
The verdict: This one created some tension, with party members dropping out in rough proportion to the wraiths dispatched. I put it last - a move the players anticipated - following the setting logic that people would be more tired at the end of the last night, rather than doing what was strategically right, and putting them in the lineup at a position where they could take out party members in preparation for other sins.

7. Pride.
The concept: The temptation is not over with the cock's crow. The morning comes and the Son of the Morning sends his last best hope from another dimension - a certain blues musician who sold his soul to the Devil, at the crossroads, at midnight, so he could play guitar and sing like nobody else.
The execution: A strangely dressed, dark-skinned man with an odd musical instrument comes down the road from the west, singing this song (which I actually put on in the session). He is not unholy, or magical, or a devil; just a mortal trying to pay off the mortgage on his soul, and there will surely be trouble if he is struck or killed. The musician humbly approaches and congratulates the party on their victory, asking them what kinds of rewards they expect. He is really aiming at the NPC penitent, suggesting that some kind of acclaim and sainthood are in the offing for having resisted the three nights. This is entirely a psychological challenge, and the party must show humility and encourage the penitent to do the same, or all is lost at the last moment.
The verdict: One of my players fell for it, mainly out of wanting the blues singer to be the good guy. Another nailed the challenge, and all it took was one. This wise fellow denied all credit, offering praise instead to the saints and Creator. Everyone else followed suit, and Mr. Johnson graciously took his leave, marking the true end of the ordeal.

Anyway ... wait until May and you'll hopefully see if I can pack all of this into one page.
Posted by Roger G-S at 12:30