This afternoon I finished up a three-session adventure that did a lot of things my players and I were not used to. I think it was a success, but it may be useful to review some of the oddities about this set-up.

They had just rescued the bard Diarmuid from his evil faerie lover, in line with the prophecy that he would sing at the religious Synod and strengthen the cause of peace in the brewing war between humanity and the Otherworld. But in order to be accepted at the Synod, Diarmuid would have to undergo a swift and efficacious, if dangerous, penance. Three nights of vigil at the Devil's Acre were prescribed.

This huge hoofprint-shaped field is the site of pacts and contracts between Heaven and Hell, under which a soul claimed by Hell can be redeemed if the person endures three nights praying in the Acre. Unfortunately, devils and other damned beings proportional to the person's importance will climb out of the caves and fissures in the Acre and try to devour the penitent's body and corrupt his or her soul. Fortunately, the rules allow you to take some bodyguards along. 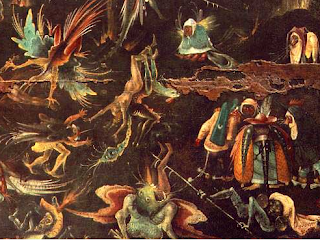 Perhaps for a more jaded party I would have served up the more grotesque of Bosch's devils. But because the Band's players are largely unfamiliar with the Monster Manual, the adventure was stocked with the standard Gygaxian "products of the imagination": lemures and nupperabos herded by a pair of spined devils, hell hounds, a sarcastic barbed devil, erinyes and so forth.

For a group used to going forth and exploring, the point defense scenario was a novel challenge.  Assailed from all sides by waves of foes, and needing to stay between them and a vulnerable bard playing the rebec and singing hymns, the mood was tense even when they ended up winning with some margin of ease. On the first night, a beloved henchman was slain, and on the last night, movement-point-draining wraiths of sloth managed to sleep one PC and nearly kill another henchman. Things would have been even more hairy if the keepers of a nearby holy citadel, charged with watching over the Acre, hadn't been convinced to sell two barrels of holy water to our heroes and loan them a two-handed sword, +3 against devils.

The defense scenario, in short, was an excellent change of tone and had me thinking about the ways it could get even crazier. The terrain they were defending was minimalist - a hill, a stone cross, a bonfire, a magic circle that only let so many devils in at a time.

But what if there was more pick and choose about where to defend?  A ruined town, a mound with megaliths that could be reinforced with stakes and traps, a besieged castle with crypts to explore and rumors of tunnels leading out - safety measure or security breach? A temple where you have to decide what's scarier - breaking the sealed crypt in hope of some advantage, or getting overwhelmed by the hordes drawn to your presence there? I'll have to think about that. 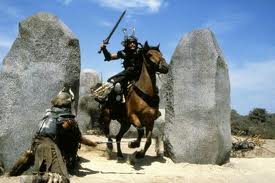 At any rate, I have made up my mind. A version of the Devil's Acre will be my entry in the One Page Dungeon contest this year. Which means I'll also have to grapple with the far knottier problem I faced in designing the adventure: how to represent temptation as a challenge to the players and their characters. More on that, next post.
Posted by Roger G-S at 23:02