For obvious reasons I've been looking at the Wikipedia List of Popes recently. One Papal feature that few people are aware of, and that features heavily on said list, is their heraldry.

Of course, the Vatican flag is on the short list of expressly allowed violations of the rules of heraldic display by abutting the two metals argent (silver/white) and or (gold/yellow). 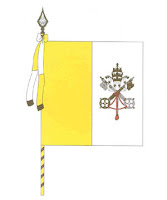 Even John Paul II, who had broken this convention in his own heraldry as a bishop (this time joining dark tinctures, with a black Marian cross on blue background), was persuaded to change to a gold cross on blue for his personal Papal arms.

(By the way, if all Powerpoint slides followed the nine hundred year old rules of heraldic display the world would be a much better place.)


Naturally, the personal arms of Popes abound in crosses, hills of Rome, "fishers of men" allusions, and the insignia of the Guelphs, Bourbons, or Venice.  But many Popes simply have imported the arms of the noble family or ecclesiastical domain from whence they came - leading to somewhat stranger achievements.


We haven't seen Francis' arms yet, but it'll be hard to top the outgoing Benedict XVI's shield. Everything can be explained ... the decapitated effeminate Nubian prince ... the cockle shell ... the pack bear ... The somewhat unfortunate Moor is the heraldic emblem of the Bavarian district he served as bishop; the cockle shell, a traditional symbol of pilgrimage; the pack bear, well, came into service after he killed Saint Corbinian's horse thanks to a charm animal spell, or something. Apparently, what caused the most controversy in the heraldry world (I am thinking very, very old men in tights, sitting at tall desks and scratching with quills) was not any of this gonzo but the use of the plain bishop's mitre rather than the triple-decked papal tiara.

Anyway, if your world is lacking in bizarre heraldry here are d-twelve ideas.

1. Two snakes, black and red, twined in a figure-eight knot and biting the others' tails.
2. A monkey, cautioning silence, and pointing to the crocodile's head he is squatting on.
3. Three ships with roses for sails.
4. A broken sword. Smoke is rising from one end of the break and water falling from the other.
5. Five bones make a pentagram, an eye in the center.
6. A pyramid of barrels, chained, surmounted by three dancing flames.
7. Two geese fighting over a glove. A fox's mask hangs over all.
8. A castle gate with eyes in it and mailed fists for towers.
9. Three pairs of dice, representing all ways to make seven, in a hexagonal arrangement.
10. Two crossed pikes, impaling two scaly pikes.
11. A lemon cut in half, from which issue three bees.
12. A lamb with a lion's mane.
Posted by Roger G-S at 23:33