Cracked.com had a piece recently that may as well be called "Don't Play That, Play This" in which the author argued for the superiority of post-1990 boardgames like Settlers of Catan and Ticket to Ride to traditional family boardgames like Monopoly and Risk. 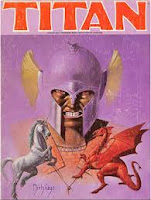 I am pretty sure nobody reading this blog needs convincing on that point, but it occurred to me that similar value judgments could be made within the category of games considered "geeky." As one example, there's a class of games that I think of as "LINO": Legends in Name Only. These date, also, from before 1990, when weekends were long and unrelieved by the Internet, and game designers put quickness of play and elegance pretty low on the list.

Revisiting these games as an adult with few opportunities to sacrifice more than four hours at a time to the gaming gods, they don't have as much appeal. The long playing time, rather than creating an epic realm beyond time and space as you remember them doing, instead just aggravates their design and rules flaws. Titan, I'm looking at you; Kingmaker, Talisman, the list goes on. I would even venture to say that almost every game in the plastic-figure chokefest genre (for example, Shogun/Samurai Swords) has been decisively made obsolete by FFG's Chaos in the Old World, which delivers the same kind of strategic sweep at half the price point and less than half the playing time.

The present age's Legend in Name Only has got to be SJG's Munchkin. A rampant best seller by hobby game standards, Munchkin's fun value is about 75% exhausted once you have read the jokes in any given deck. The game grinds on randomly, punctuated only by outbursts of violence against anyone so much as threatening to be the winner.

Yesterday, though, I got introduced to a game that kicks Munchkin out the door. It may be hard to find outside the UK, but Braggart plays in a half hour or so and delivers solid laughs. You are taking the part of Generick Fantasye adventurers sitting around in Ye Old Fantasye Inne and boasting of their exploits, which you put together from a required Deed ("I heroically slew...") and Foe ("...the foulest of all dragons.") and can embellish with a Scene and Result. All these cards have a point value, with the less impressive ones being lower. There are also Ploy cards that let you steal and draw cards, and "Liar" cards which let you switch out better for worse cards in another player's story. The humor comes mainly from bathos ("I forged elemental weapons to destroy ... an angry looking chicken") and slightly suggestive exploits ("I covered myself in oil to wrestle ...")

Strangely enough, Braggart's flaws are also Munchkin's flaws: the laughs follow the law of diminishing returns, and the gameplay is random with a hobble-the-leader tendency. Honestly, the best feature is that Braggart proceeds to a definite conclusion: the winner is determined when the deck runs out. What Braggart lacks that Munchkin doesn't, of course, is over a decade of expansions.

All the same, what makes it work for me is that it's a sendup rather than a simulation of adventure, kind of like the Baron Munchausen game on rails.
Posted by Roger G-S at 11:30