Scaling Spells and the Power Curve

AD&D's approach to magic is a curious thing. Cleary, Gygax was getting a little concerned at the power levels of high-level magic-users compared to other classes; take the addition of magic resistance, for one. At the same time, there is so much more detail about spell acquisition and casting compared to the original game and, despite all the 1000-gp gem material components, not all of this is unfavorable to the wizard.

For example, there is a lot more scaling by caster level of spell duration, range and effect. Magic missile gets not just a smoother curve of additional missiles compared to Greyhawk, but extra range per level. Scaling makes sense, of course, but the problem with it in game terms is it adds to the already exponential increase in power that magic-users experience.

I won't bore you with the graphs and tables. Okay, maybe just one little one, based on the OSRIC rules. Suffice it to say that fighters can stay in the fight for only as long as their hit points hold out, so hit points are the main measure of their effectiveness (higher hit chances being balanced by tougher monster armor at higher levels, and vice versa). Even with extra attacks at level 7, a fighter's effectiveness therefore only goes up by a factor of 15 or so in 10 levels.

Meanwhile, we will assume that magic-users load up on quantifiable damage spells at each level they can, and the effect of spells scale to the spell's level, more or less. Starting with 1 die of damage spells (magic missile), a 5th level magic-user gets 3 castings of 3 magic missiles each plus, ideally, a fireball or lightning bolt which adds 5 more dice, plus whatever goodies are at 2nd level - traditionally, spells more oriented to helping friends or hindering foes. So, in 5 levels an AD&D magic-user has become more useful by a factor of 15 or even more, compared to a fighter who needs 10 levels to get there. 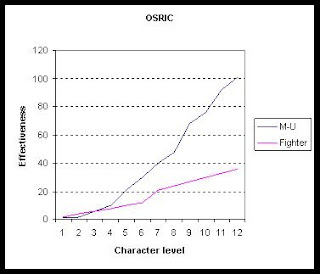 A few ideas for the magic system I've been developing for a more OD&D-like system:

1. Tone down the scaling. This makes spells easier to resolve anyway. Ranges and effects can be improved by a means I'll show in the next post, so casters need not feel limited or predictable. I'm also considering having less intense multiplication of magic missiles, and keeping other damage spells at a fixed number of dice.

2. No duplicate spells memorized. This tones down the power curve and makes the magic user have to be more creative with the less obvious spells.

3. Contingent on 2, above, allow 1st level magic-users to have 1 extra 1st level spell memorized. This smooths the curve in the other direction, giving the magic-user one more encounter to be useful in.

A more radical solution (inspired by Ian's comment here), which also makes creating NPCs more manageable, is to not have level limits on spell slots; just allow 1-2 spells at start + 1 extra spell per character level, with new spell levels being learnable at each odd-numbered character level.

All this by way of prelude to the 2nd level spell lists, coming up next.
Posted by Roger G-S at 22:45