Fatal Hatchet of the Orange Goblin

The Trossley adventurers healed and rested overnight. Going down to the common room of the Duck and Whistle, they found the Mayor, captain of the guard, and the village priest in conference with Burnsteen the Warden of the Wood, who had converted an inn table into a tactical display with the aid of crumbs and straw. The plan was for an assault on the cursed millhouse to begin immediately - the captain and four men taking the expected route by the road to the north of the mill, while Burnsteen and the adventurers carried out the "renowned Wood Warden flanking maneuver", crossing the river south of the mill.

Before leaving town, the adventurers - including the wounded henchman Cordoon, who had refused healing from the village priest on account of his own pagan religion and the priest's insinuation that conversion might be the price of health - decided to stop briefly in to the Temple of St. Hermas and swear an adventuring oath on the vaunted altar there. Because of this show of piety, I was resolved to yield mercy in whatever mishaps might befall - this one time!

As they entered the woods, an unnatural stillness echoed in their ears. The birds were silent, and as they approached they felt a low unease that resolved itself into the hideous, otherworldly grinding of the mill stones! At that point Burnsteen loped through the woods, the party following behind. When they reached the lower part of the river, it was flowing more strongly - the water gate had been opened, apparently. They forded without incident and marched north through a forest where the new-sprouted leaves and buds were rustling and twitching, though no wind could be felt.

Eventually they reached sight of the southern white-painted house of the mill complex, part hidden behind some mounds of earth that had been there for some time. According to plans, they waited there until they heard yelling from the north over the maddening grinding of the wheels and the creaking of branches overhead. Then they advanced quickly past the house, with its wall on the left and a long and thorny hedge on their right. In the midst of this, the hedge lashed out at Burnsteen in the front with thorny tendrils, rolling a 1. How does a hedge fumble, you might ask? I was stumped, but my wife provided the answer - two tendrils had both reached for the woodsman and gotten tangled in each other. At the same time, a tree in the rear went for Lesseig, scratching the elf hireling slightly, and the party ran ahead madly, rounding a corner.

It was then that the keen-sensed Burnsteen saw the two goblins, one orange and one yellow. They had meant to rush out the front of the white house but were, shall we say, distracted by the thrashing vines of ivy that were lashing out from under the porch. Drawing a bead, the NPC woodsman hurled one of his signature throwing daggers, scoring a crit and catching the yellow goblin in the throat. (I'm ruling that crits either have a detrimental effect on their victim or score maximum damage, at the victim's choice usually; but since this was a surprise situation I gave Burnsteen the choice, and players voted to score damage.) Meanwhile, Boniface the militant, followed by the hireling Balm, rushed the porch, and the orange goblin fled within. As Boniface hacked at the ivy, Balm impetuously rushed into the house.

Now what? As my wife pointed out, the party faced a dilemma. They had just sworn an oath of mutual aid, henchmen and hirelings included, so they couldn't just leave the reckless Balm to face the house of horrors alone. Loyalty works both ways! But they were also on a military operation, and the sounds from the north were not encouraging, what with the captain yelling "Cowards!" and "Come back!" and loud, bestial growls from the same quarter. The fateful decision to split the party was made. Boniface would follow Balm, trailed by a hastily conjured unseen servant with orders to report back if any trouble arose. The rest would head north and reinforce the guardsmen.

Balm and Boniface followed the orange goblin to the kitchen of the house, whereupon, with bad luck "to hit" and exceptional damage from the goblin's hand axe, both of them fell at negative hit points. Meanwhile, the rest of the party ran into a wounded bugbear that was retreating, and wounded it some more; Ephemera the magic-user finally slept it after it swung at her and - very fortunately - rolled minimum damage. 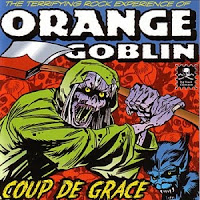 At the unseen servant's bidding, the rest of the party rushed back to the house, to find Balm lying on the ground dazed, bleeding and with his helmet split in two, and Boniface with his ear cut off, unconscious, losing even more blood from a horrible jagged wound and in shock. (The result of rolls on trollsmyth's merciful Death and Dismemberment table and the good graces of St. Hermas and the dice. I may use a more lethal table next session.) The orange goblin was nowhere to be seen, having evidently thought better of administering the, um, coup de grace.

While the guards posted watch, the party searched the kitchen and dining room and found some quite modest treasures - a set of nice plates here, some rather unusual cooking ingredients there. And then, a tap on Ephemera's shoulder from the unseen servant who had been charged with patrolling the grounds ... a gurgling scream ... and the smell of smoke from the front of the house ...

A nice enough cliffhanger for the next session.
Posted by Roger G-S at 22:29