My output of rules and game theory ideas has been slowing down as real life increases its demands, and Actual Play (TM) also puts requirements on my time. The hope is that the experience proves a testing ground for the theory, anyway. 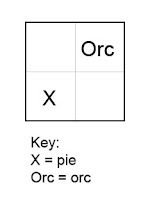 One pragmatic problem that's come up is what to use for dungeon and campaign mapping - with the aim of producing not just something useable, but something that can be shared and shown out with a fair amount of pride. My original maps for the Cellars of the Castle Ruins, which I was running over the summer, were done using the freeware program AutoRealm. However, while richly supplied with graphic elements like stairs, rubble, jagged lines, and doors, AutoRealm consistently showed problems with maintaining line thickness at various resolutions. Perhaps combined with this, snapping to the graph paper grid was often a little bit off, and the map's shapes would shift around no matter how much I fiddled with it. The upshot of all this was that AR wouldn't produce a production-ready graphic that I was happy with, though the rough and ready map was fine for running sessions from.

For the Trossley campaign I experimented with mapping a few key sites in PowerPoint. Although it's a fairly good object-oriented program that allows a grid and approximation to graph paper, it's harder to get one's hands on the requisite shapes for mapping. I may have to hack together some stair, door and window icons for cutting and pasting. All the same, I'm confident that Powerpoint will serve my needs in the short term, even though the maps do look a little pedestrian.

What's the consensus out there - do I really need to put down cash for Campaign Cartographer or the like to get decent looking dungeon maps? Note that tile-based programs are right out for my rather geometrically convoluted architectures, though my modest need for outdoor mapping so far is handled decently by Hexographer.
Posted by Roger G-S at 14:50