My interest in folk saints, and folk-beliefs about Catholic religious figures more generally, began with the Miracle of the Paella. On a visit to Morella, an inland hill-castle town in northern Valencia, I saw the following plaque on a house wall: 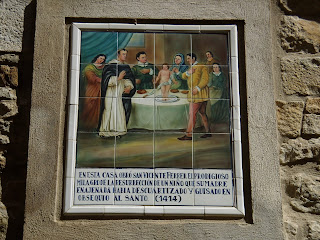 It illustrates the miracle said to have occurred when St. Vincent Ferrer, a Catalan Dominican preacher who lived around the turn of the 15th century, visited Morella. His hostess turned out to be insane. Ashamed that she could not offer good meat to the Saint, she slaughtered her young son and served him up, Valencian style, in a paella. The Saint fortunately recognized the meat for what it was, and resurrected the lad in the middle of the dish.

Anyone who spent as much time as my young self poring over the D'aulaires' Greek mythology book would quickly know this tale as a variant of Tantalus' sacrifice of his son Pelops to the Gods. Like the Saint, the gods identified the meat on offer and resurrected the boy. Many other pagan stories live on in European folklore about the saints and other religious figures. In Portugal, Bartholomew is revered by sailors, carries a trident, and is attended by a strange sea monster, like Poseidon. The existence across Europe of Black Madonnas has been seen as a continuation of various cthonic and nature cults, while the dark Saint Sarah of the Gypsies bears an explicit connection to the Hindu goddess Kali. And let's not forget this fellow, who's come a long way from being a Lycian bishop.

Other folk-saints are mainly legendary figures, including the beloved St. Christopher, who was expelled from the calendar by the Vatican in 1969, and has been analyzed as a sort of combination of Hercules and Hermes. Stranger still, some traditions paint Christopher as coming from a dog-headed race - the one pious gnoll on the planet? - not to mention the folk-saint who was actually a dog, Guinefort (see here for both). The legendary Wilgefortis or St. Uncumber was a woman who prayed to grow a beard so she would be liberated from having to marry - clearly this lady was no Dwarf! Another mythical female saint, Ursula, who supposedly led an army of 11,000 virgins to martyrdom, has been identified with legends of the Norse goddess Freya. Speaking of virgins (or not), the less said about the unspeakable Saint Foutin the better.

The hard life in Latin America has led to a flourishing of folk saints who, now more than ever, look after the poor and desperate. Such dubious characters as Mexico's Pancho Villa and Argentina's Evita Peron attract popular prayers. In the midst of the ruthless drug cartel wars of northern Mexico, some sentimental thugs - and many common folk - give offerings to the righteous bandit Jesus Malverde. Apart from historical figures being popularly canonized, other revered figures make their way in from obscure parts of the iconography. Leonard Cohen fans may be familiar with the Anima Sola, a lonely soul being released from purgatory. More eerie still is the modern-day cult of Santissima Muerte, a holy female figure of Death often represented by an actual skeleton, echoing the Aztec goddess Mictlancihuatl, who "grants blessings no real saint would approve."

Does your role-playing game feature characters who flit rootlessly from place to place, constantly exposed to death and danger, living hand-to-mouth in search of the next big score? Maybe they'd be tempted to make a small offering for the blessings of a righteous bandit, or to keep Death off their backs and on their enemies'. The folk-patron of adventurers in my world of Mittellus, St. Hermas, is up next in this series.
Posted by Roger G-S at 23:49