These two pages really go together; one gives the basics of an approach to character creation, the other follows it through with some of the basic stats for each character class. After that there is one page for each class detailing the special powers they get. 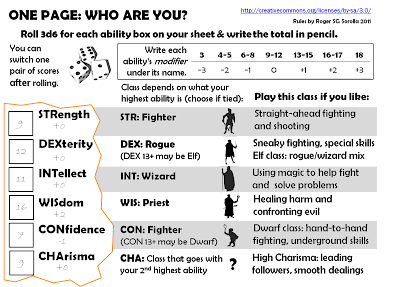 Some comments on the design here. I take a "cut the crap" approach to the relationship between ability scores and character class. If you don't take the obvious incentives in Original, Basic and Advanced D&D to put your highest abilities into the class' prime requisites - the experience bonuses, the stats helping with class powers - you must be making some kind of point. The kind of point that no player I have ever known, ever wanted to make.

So why not just require it?

Making a fighter with average Strength so he can have high Wisdom is a false choice. It's the illusion of an option because it's completely suboptimal, and can only lead to regret once the player understands the game system. By turning the false choice into a forced choice by the rules, mental capacity is freed up to make other, more meaningful choices.

(Other meaningless choices in old school D&D and the neo-clones who won't let its design choices go: duff seldom-useful spells that have to be memorized beforehand ... weapons with no reason to use ...)

After all, characters can still be quirky on their secondary stats, because I only allow the one switch necessary to bring you into the class of your choice. If you roll 9 strength, 15 intelligence and 13 wisdom and you want to play a fighter, he'll still be either smarter or wiser than your average grunt.

Another thing. Turning Constitution into Confidence keeps the abbreviation in line with Original Standard D&D, and lines up with my previous arguments about changing the CON stat and treating character hit points as morale. I'm pretty pleased with this move. It even feels right in its old school location next to Charisma, instead of feeling out of place as a physical stat most akin to Strength.

Another other thing: Dwarf and Elf "class" to let you know, this is race-as-class territory.

This may not be the most modular of the handouts, but it's necessary for a complete game and it lays down the background for some of the assumptions and choices in the more portable stuff coming up.
Posted by Roger G-S at 22:21