Seeing the first novel in Jack Vance's Planet of Adventure series put up for free download in the USA, I'm reminded of how important false consciousness is in his novels.

(Spoilers for Planet of Adventure, Emphyrio, and Nopalgarth follow.) 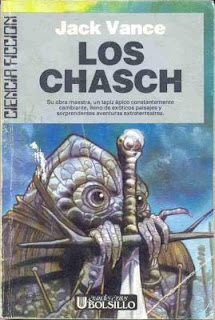 False consciousness is a form of sophisticated social control that depends on getting people to believe myths that obscure their own exploitation, so that they fail to identify with others who are similarly exploited. It's a term associated with Marxism, though really it can be used in any critique of a social system. For example, Nietzsche and Ayn Rand use the concept a lot, though on behalf of a different kind of oppressed people than Marx's proletariat.

Throughout his work, Vance describes schemes of exploitation with detachment and brio, whether they be the crafty swindles of his picaresques, or the society-wide swindles of his space novels. The reader is left to supply moral outrage, admiration, or cynicism, as the case may be. The larger point of Vance's dry style: it is enough to describe straightforwardly a system that obscures itself by false consciousness in order to expose it. To follow through by detailing the back-and-forth of a struggle for material and political power is more Jack London (in socialist mode) than Jack Vance.

The Planet of Adventure series presents a world that four main alien races have settled. Humans also live there, but many of them are subservient to the aliens - Chaschmen to the Chasch, Wankhmen to the Wankh (cease your snickering, they were changed to "Wannek" in later editions), and so on.

The servant humans have become genetically and psychologically altered to resemble their masters. But beyond this, each human type has a different form of false consciousness that justifies their relationship with their superiors. For example, Chaschmen have been led to believe that they are the larval form of the Chasch, while Dirdirmen live to improve themselves and eventually become indistinguishable from the Dirdir. The intriguing point here is that false consciousness can blur even the species boundary.

Emphyrio, one of Vance's most political and heroic novels, presents a similar kind of exploitative society, with an alienated aristocracy that keeps the populace of the planet Halma low-tech, ignorant, and producing artifacts of great value for a pittance. Here, false consciousness again conceals that the exploiters are not just alienated, but aliens. When this fact is revealed, a near-bloodless revolution occurs, and all is set right.

What is this theme of nonhuman exploiters all about? On the one hand, Vance could be drawing parallels with systems of exploitation and false consciousness here on earth - a radical point. On the other hand, you could also see the implicit argument that humans are basically good when left to their own devices, so oppression is something that has to be explained by tagging oppressors as nonhuman. This is a more conservative point to make in a story, although here I'm using "conservative" and "radical" in a different sense than the usual right-wing/left-wing one.

Think of the belief that the powerful people of the earth are disguised alien lizards. Such conspiracy tales don't facilitate radical action, in the sense of organizing for a power struggle. Their more usual effects are self-satisfaction at having figured things out, and frenzied desire to communicate the big secret. After all, if false consciousness can be reduced to a big secret, then your revolutionary praxis need go no further than Facebook, and the revolution will be televised, often to a stunned planet from a commandeered news station.

That's not how things work, though. Real false consciousness lets you see the facts (The government just passed tax cuts for the wealthy?), but imposes a different interpretation that is not liable to be punctured by a guerrilla broadcast (Great, I don't want to have to pay those kind of taxes when I move up to making that kind of money!)

So, peering through the dry and detached style, which side does Vance come down on? I think the key is to be found in one of his underappreciated novels, Nopalgarth, also known as The Brains of Earth. Admittedly, it's more a novel of ideas than of effective characterization or thrilling adventure. But what ideas!

Earth scientists are contacted by alien Xaxans who are fighting invisible Nopal, monsters that sit on a being's head and control their thoughts and desires. The entire population of Earth is colonized by these creatures, which the Xaxans remove from our heroes by a painful treatment. But the twist is that the aliens themselves are pawns of a more sinister intelligence, controlled by  an amoeba-like monster at war with the Nopal that sends invisible tentacles to control the Xaxans' minds. The human heroes eventually find a way to be free of both.

Written in the mid-60's at the height of the Cold War, the allegory seems obvious, though I don't know of any other commentators who have picked up on this, or even see this novel as worthy of interpretation. Marxism, Vance seems to be saying, gives you great insight into the system of oppression. But lurking behind it is an even less palatable system of mind control, centralized in the Soviet Union. This critique of the irony of radicalism is very much in the spirit of Burkean, small-c conservatism and Orwellian socialism. In the end, Vance promotes a rugged individualism in which all ideology is suspect; a message that lives beyond the death of the USSR, thanks to the timeless science-fiction setting of his writings.
Posted by Roger G-S at 13:00