I'm working on the sixth and final main wilderness encounter table for "savage" environments in the spirit of Lost World pulp tales. Naturally, it takes me back to the days when dinosaurs and Pleistocene megafauna were all I could think about, thanks to their three-dimensional embodiment as MPC toys ... 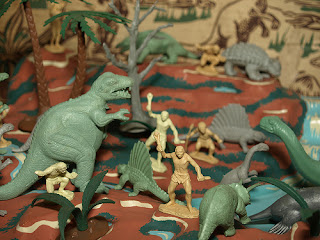 Those were the two-fisted days when dinosaurs dragged tail and wouldn't be caught dead in feathers. The Aurora models already strained credibility with the prehistoric woman in a rawhide Mary Quant number menaced by a two-headed snake. On top of that, their bases fitted together to create a young-earth Flintstone monster zoo where saber-toothed tigers rubbed shoulders with Styracosaurus.

There were fourteen models and I owned eleven. Haven't thought about them in decades, but memories of the plastic parts and the jigsaw of the bases leapt forth from my memory with unseemly speed. Here's a nostalgia site with some much better paint jobs than I could manage ...

Anyway, for gaming purposes there only need to be 8 dinosaurs, right? For medieval sword-slingers who've stumbled on the Valley of the Lost the distinction between a Rhamphorhynchus and a Lambeosaurus doesn't bear mentioning.We don't need to pad things out the way Gary padded the Monster Manual and MM2. Add to the canon laid down in the 50's, Spielberg's own raptor-types for a low-to-mid-level challenge. The crested guys are more for random prey than any significant danger.

(some silhouettes by Telecanter, others by me, others from the Phylopic archive.)