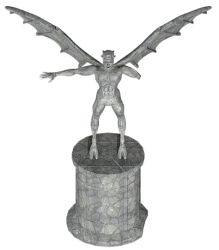 In fiction writing you may have heard of the said-book-ism -- the overly descriptive dialogue synonym that went out of style around the 1970's largely due to its naming and shaming in the Turkey City Lexicon.

Well, if you're writing adventure scenarios you shouldn't be writing dialogue. Really. But there's a parallel in scenario descriptions: let's call it the "is-book-ism."

All to avoid the humble verb "to be" with its drabness and its insinuations of the passive voice...

An idol of a horned demon is in the room.

Most of these locutions are called out as cliches in the Fantasy RPG Bingo Card page by Ryan Macklin (refresh several times to get the picture). But is this fair?

Writing RPG scenario text is a unique literary enterprise. It's best compared to writing stage directions in a play, or the art directions in a comic book script. At its best, the genre works this way: a scenario author creates vivid images and interesting contingencies in the mind of the reader, the gamemaster, which she or he then describes to the players, who in turn react, unlocking more images and contingencies from the GM. Let's call this the GM-In-The-Middle Theory.

Trying to cut out the GM-In-The-Middle and communicate directly author-to-player, through boxed read-aloud text, is a widely and justly denounced "cheat" in this procedure. Having ruled that out, how then to write the module text in a way that helps the GM communicate and interact with the players?

Useful principles emerge from the GM-In-The-Middle Theory, if you consider you are writing for the players through their characters. So, don't describe anything the players will never get to know. Write the most apparent things first, then the more subtle things, then things that can only be known by interacting. Don't force the characters' reactions.

A harder question is, how deeply should these descriptions be written? Some have advocated a minimal, list-like format, to try to break the habit of read-aloud; dispensing with the humble "is" in much the same way that the Russian language does. I've never been happy or comfortable with this.

The GM-In-The-Middle approach explains why: to work in this way, the writing must create a fully formed and vivid image in the mind of the GM, an image that he or she envisions and believes in. Reading someone else's list makes me feel like I'm taking inventory in a dollhouse. Reading prose, even prose with archaic or formulaic or dungeon-kitsch elements, can transport the GM so that the job of description becomes natural. Perhaps the prose can furnish a few bright and lapidary phrases that make it through to the players, but the heavy lifting should happen directly through imagery -- just as someone who is fluent in a second language forms their words directly from raw thought rather than passing them through a process of conscious translation.

All this supports the Is-Book against its naysayers. As long as the prose is descriptive and evocative, without compromising either mission with cliched or rote genre-copying (who the hell knows what a gambrel roof is anyway?) it's OK to have pillars march away into darkness, idols loom, portcullises menace, balconies survey, and wardrobes dominate.
Posted by Roger G-S at 23:10