There is one use of "appears" language, which I mostly panned in a previous post, that actually can be appropriate -- when the character has only an indefinite idea of how to call something they're experiencing.

"The vial is full of a fine white grainy powder that looks kind of like salt" (you need to taste it or have alchemy knowledge to find out anything different).

The difficulties in describing this kind of situation are basic to the task of conveying visual information through language. To describe something efficiently you must categorize it. "You see a cylindrical form about two meters high, topped by a sphere, with one long cylinder hanging from each side." That's just a clunky, roundabout, parlor-game way to say "You see a human-shaped figure." But the problem with "human-shaped" is that it forces an interpretation too strongly, while "cylindrical form" doesn't capture the automatic leap to a conclusion that you might experience when you see this feature in silhouette: 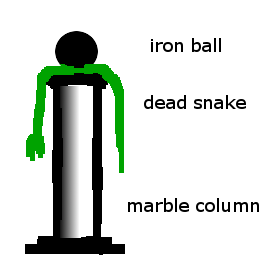 For non-visual cues, using approximate metaphors seems fairer. "You hear a sound like a huge sleeping animal snoring" can be revealed as just waves resounding in a grotto. "You see a powder like salt" but when assayed it's actually the alchemists' compound zafronast. Fortunately, visual cues suggest their own method or resolution, transferring the characters' perceptions' to the players' themselves by means of illustrations.

When shown and not told, whether drawn on the spot or prepared ahead of time, the visually indefinite can be a powerful stimulus to conjecture and mystery. Consider the following glyph that recent adventurers in the Castle of the Mad Archmage found daubed on the wall in the south of the second level: 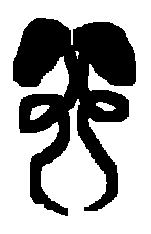 Its meaning was much debated -brains? snakes with wings? Looked sinister enough, anyway. Only when a more detailed amulet was found on the body of a cultist was the intent made clear: 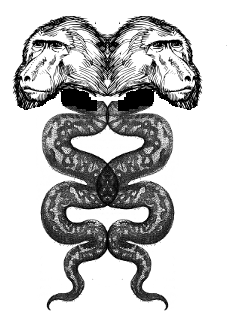 To depict the twin heads and tentacles of the demon lord Demogorgon.

Apart from crude drawings, the visually indefinite can be achieved by holding a mask of random dots printed on an overhead projection over an illustration; else, by holding it up at a distance, as I did in the same adventure when the party glimpsed from afar the notorious fountain of serpents, which is illustrated in the Castle of the Mad Archmage illustrations booklet.

Clues first, then revelation, is a general principle that works wonders when running adventures. A wonder or hazard hinted at before provides a strong guide to play, and makes the final encounter that much more satisfying, than if it comes as a complete surprise.
Posted by Roger G-S at 16:10