One theme I treated in my old Crimes Against Mimesis essays (see previous posts) was the clash between the elements of a puzzle and its context. I urged game designers to integrate game objects and puzzle situations more fully into their fictional worlds. A chainsaw shouldn't just be sitting there on a table for no reason; why not link it to a lumberjack that you've heard about in another scene? A cryptogram shouldn't just be there as a puzzle on a wall; maybe it's a way that the Red Hood Monks communicated to each other privately without breaking their vows of silence.

In the gonzo context, the player of the game is self-aware, and we see all sorts of random objects and puzzles, frame-breaking references to pop culture, genre intrusions, and other elements of gonzo.  What I was setting up as a standard in my Mimesis essays, though, was closer to James Maliszewksi's label of "Gygaxian naturalism" in D&D (though you could just as easily tag gonzo with the "Gygaxian" label). Naturalism applied to monsters leads to developing other characteristics than combat stats - to flesh out their feeding, reproduction, social structure, anatomy, and other mundane details. Naturalism in puzzles, likewise, makes sure each puzzle or problem has some meaning outside of the experience of the players trying to solve it. Naturalism creates more immersion in the world and strengthens the fictional frame rather than breaking it.

With the benefit of time and perspective, I would still recommend the designers of puzzles in role-playing scenarios to put them into context if they are going for a naturalistic feel. I think gonzo dungeons inflicted on a willing public are perfectly OK, the current belt-holder being Joe Bloch's Castle of the Mad Archmage, a sprawling reconstruction/homage to Castle Greyhawk. At the same time, there is something very satisfying about a puzzle or dungeon trick put into naturalistic context, and you have to respect the art and craft required to reconcile an artificial obstacle with a realistic world.

I've also realized there is a third option for puzzle context in roleplaying games, or for that matter, interactive fiction. There can be a mythic resonance to puzzles, monsters, dungeons, and other elements of an RPG.


The meaning of the myth will differ according to genre. In a heroic myth, for example, monsters and puzzles just appear as challenges to the hero. The myth teller doesn't need to specify how the dragon guarding the Golden Fleece eats, where he comes from, or how he figures into the sociopolitical climate of Colchis. But neither is the dragon a genre intrusion or random joke. He feels right. On a poetic rather than naturalistic level, he resonates as the guardian of a great treasure.

In a Mythos of horror, monsters are there to eat the hero or worse, and puzzles are the sinister gateways through which overly curious mortals are punished for their greed, curiosity, or cleverness. Most horror literature involves the transition from a naturalistic world to an inexplicable one. So, the elaborate, naturalistic  antiquarian puzzle in M. R. James' horror story The Treasure of Abbot Thomas (pdf) leads up to a nasty, wholly mythic surprise, that in a symbolic sense both represents and punishes the characters' greed.

So far, we have considered puzzles (set-piece situations with a single solution) and problems (open-ended obstacles with multiple possible solutions). Another category of non-combat dungeon feature is the trick - not so much an obstacle as an object with beneficial or harmful outcomes, often determined by the way the characters interact with the feature. And of course, we have the trap.

Puzzles, problems, tricks, and traps. How do they fit best into each of our three contexts?

Gonzo. This is the easiest context to work in, because anything goes. Puzzles can be barefacedly imported from other contexts, such as the flesh golem number puzzle in White Plume Mountain, or the infamous Tower of Bozbar (Hanoi) in the Zork Zero computer game. Any kind of problem can be set, and the solutions placed nearby or far away without worry. Tricks can be the classic, inexplicable "Wheel of Fortune" magical crapshoots memorialized as Item Five of the Old School Dungeon Design Guidelines, or indeed anything else, and traps can just be random sources of damage without rhyme or reason. A skimpy naturalistic fig leaf can cover all these elements by blaming all on an insanely powerful, powerfully insane, space- and reality-traveling being. The only law is to avoid repetition, keep the hits coming, and leaven the gonzo with some straight stretches, or else risk falling into WG7 syndrome.

Naturalistic. Puzzles are harder to justify in the naturalistic world. A puzzle is complex enough that it implies a creator. But if the stakes are access to a villain's lair or a treasure, would a naturalistic security consultant really allow intruders the chance to enter by correctly arranging soup cans in a pantry? Pretty much the only puzzle types that make sense naturalistically are:

1) puzzles intended as literal locks and keys, often where the key is not enough to open the lock, but some additional insight must be applied - as a security device against the key falling into the wrong hands.

2) broken mechanisms that must be reassembled - including elements of magical rituals.

3) intentional cryptograms as security devices, where it's fully worked out who was intended to figure it out, and why it is that the characters have a chance when the people the device is supposed to keep out shouldn't.

4) anagrams or allusions left as clues; there are a number of ways to have this make sense, one of my favorites being in the Japanese classic manga Lone Wolf and Cub when a dying ninja, wanting to help the hero but being bound by honor from revealing information directly, makes a poetic allusion to the secret with his dying breath.

Much the same problem applies to traps. Someone who runs a game wants the trap to be fair. Someone who sets a trap doesn't want it to be fair. If you're going to set a trap to guard your castle in a world filled with 10th level fighters, sorcerers with fly spells, and so on, it had better be a stone cold killer, no saving throw. Natural hazards such as collapsing ceilings, defensive measures such as booby traps maintained by nearby troops, are all well and good. But the kind of secret dungeon traps encountered by Indiana Jones and the like are unlikely at best, part of genre myth rather than naturalistic security measures.

Naturalistic tricks are also hard to justify. The usual justification is that the good effects were meant for the benefit of previous inhabitants, while the bad effects are meant for, er, intruders who are stupid enough to do things like drink from fountains randomly. But random-effect tricks really don't make sense in a naturalistic environment, unless you assume that the trick object has become corrupted over time. For example, a vending machine that used to dispense iron spikes and arrows has had the "arrows" compartment infested by giant poisonous termites.

Problems, however, go very well with naturalistic settings, because they can be natural hazards or manmade obstacles that don't necessarily have a neat, key-like solution.


Mythic resonance. As we have seen, naturalism restricts noncombat challenges consierably. Mythic meaning lets the puzzle designer break the naturalistic bindings, but at a price: your myth must have weight and meaning; it can't be silly. You can also tap into the world of fictional tropes, the modern little sister of myth, home of Indiana Jones and all his pulp forebears. But here again you risk alert players figuring out the cliches and becoming disconnected from their characters, slipping into the gonzo mentality.

The puzzles, problems, and puzzle-monsters of myth are put there to test or tempt the hero. While they are not naturalistic, neither are they meaningless, for they follow a poetic and archetypal meaning. To copy existing myth-puzzles assumes that your players are ignorant of them. There's no way to breathe fresh air into the sphinx's riddle or the secret to defeating Medusa, unless you run an ironic twist on the solution or delve into obscure corners of folklore. But to create new mythical meanings is also no small task, requiring a solid background in symbolism and a poetic way of thinking.

There is no how-to manual, short of advising the would-be mythmaker to devour all the writings out there on symbolism, from Frazer's Golden Bough to Joseph Campbell. As a worked-out example, the ongoing literary analysis of Gygax's Tharizdun module at Lord of the Green Dragons shows how the apt deployment of symbolism and atmosphere can give mythic heft to a number of otherwise unremarkable tricks and puzzles. As an original example, let me present the following gonzo-style trick and show how it can be turned into a more resonant hero-test: 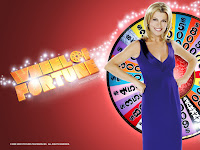 In this room stands a large wheel against the northern wall. Its surface is divided into 20 painted slices, and there is a pointer hanging over the wheel at the top. Each slice has a different legend or figure painted on it. Standing by the wheel is a non-hostile female wight called Vanna wearing a glittering gown, and only she can spin it, when asked to. The effects of the 20 slices upon the person asking for the spin are ... (d20 table follows)

Apart from the bad pun on a 1980's game show hostess, this roulette wheel is just a standard random-table trick. Assuming we keep the wheel, to the mythically educated mind this brings up a number of concepts: 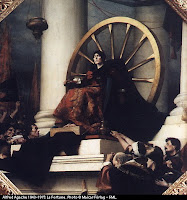 * The blind goddess of chance, Fortuna or Tyche
* The stunning painting of her (l.) by A.-L. Agache that I recently saw in Lille, France
* The medieval icon of the Wheel of Fortune and associated Tarot card
* The flaming wheel of punishment, whether of the Greek sinner Ixion or the Japanese Wanyudou

With these things in mind we give the trick deeper meaning. It appears in a shrine to the Blind Goddess of the Wheel; its mythic meaning is to tempt people to throw their lot in with chance, as an allegory of folly. The wheel appears behind a marble statue of the Goddess clad in moldering finery. It is freely mounted to spin, and the Goddess is wearing a star-shaped headdress whose peak points to the uppermost part of the wheel. In the manner of the medieval Wheel of Fortune, the wheel is decorated with eight figures; a beggar at the nadir, then going clockwise, a laborer, an adventurer, a merchant, and a noble at the apex; then descending, a wastrel, a murderer with bloody sword, and an outcast. Fortuna, as in the painting, creates madness and compulsion. Chaotic aligned characters who approach the wheel within 10 feet are compelled to spin it and may fight each other for the privilege; neutrals are allowed a save; and lawfuls may spin the wheel or not as desired. The wheel must be spun completely around and thereafter it lands at random on a figure, with these effects (d8 table ...) Any attempt to rig the wheel's result is met with a burst of damaging flame from the wheel. The wheel may be spun as many times as liked, but after each time past the first, the character spinning must save or become an obsessed worshipper of Fortuna, unwilling to leave the room or touch the wheel.

Next up: Trick mechanics and fairness
Posted by Roger G-S at 14:32