Going on an even deeper level than the previous two installments, once you know the general character of a street area, you can use coins to create a scene for encounters or exploration. The random facing of the coins thrown down create a twisty little street that may branch and fork, as the characters enter from the larger thoroughfare. 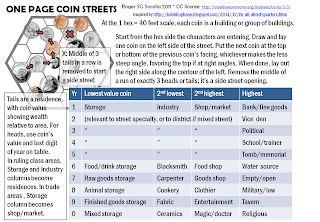 The example I'll use is the more easterly of the two traders' districts from the previous example, magnified five-fold.

A little latitude in interpretation is needed here; the "industry" of the traders is probably haggling with each other, as opposed to their "shop" which involves dealings outside the world of traders. So, the "industry" related to the character of the street is an exchange for traders, while the "shop" is a traders' office.

Looking at the street in detail, the various establishments become connected and fleshed out. Dominating the street is the tall, severely imposing three-storied house of the Mallordrake trader family. Adjacent lie their office and a storefront through which they sell unwanted goods at bargain prices. Their prestige is such that they own an exchange building at the end of the street where all the city's traders meet to talk business, and where the street opens onto the plaza they have pressured the local authorities to maintain a post of the Watch. Opposite that, an elegant public garden advertises the family's generosity and good taste. The houses on the street, including the side street that slopes down to the river, are inhabited by the Mallordrakes' client traders and their families, one of which is a dwarven family. The Mallordrakes and their faction are known for their conservative style in fashion and this is served by the tailor and clothier Bostervick.