The original megadungeon, Greyhawk Castle, was devised for a rolling playgroup that met over many long evenings and weekends. Addicted to the thrill of a new style of gaming, that group could cover pages and pages of graph paper, forge characters in the heat of unforgiving death, and over years reach the highest levels and the lowest.

Today's gamers rarely have time for such foolishness. Jobs, kids, life in general keep us to one session a week if we're lucky, though more often expect twice a month.

Will your party explore the whole of whatever megadungeon you've created? Almost certainly not. But more important is the knowledge that they could go off in many different directions; that the whole living breathing potential sprawl of the place is there around them. 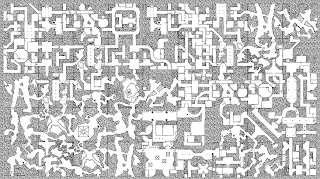 To achieve this feeling, and the feeling of meaningful exploration, the dungeon must be more than an infinitely repeating wallpaper of passages, rooms and random filler. Three desirable things:

2. The areas of the dungeon should relate a meaningful history for the players to discover. This can happen on a micro level - "this was once the kitchen of the Minotaur Lord but now it is the lab of a crazed alchemist" - and a macro level - evidence related to what the Minotaur Lord was doing, how he got on with the other power groups, what his place was in the rationale of the dungeon.

3. The areas of the dungeon should refer to each other, both in terms of architecture (a multiplicity of stairs, chutes, teleporters giving the sense of freedom of movement between safer and more dangerous places) and features ("this lever opens the portcullis on level 3"..."in this room is an ambassador from the troglodytes on level 4").

Now, life is short not just for players but GMs as well. The temptation is to make it up as one goes along, but this risks missing out on the epic sweep and overarching plan implied in criteria 2 and 3. Recently, JDJarvis over at Aeons and Auguries has suggested a modular, crowdsourced approach, in which people contribute individual sections but the exact geographical connection between them is up to the individual GM. I like this, because it takes a lot of the burden of effort from the individual GM while still allowing creative input and personalization. But question number 2 and 3 remain - how to convey an overarching theme and plot?

Next post I'll address this issue, explain why I can't stand geomorphs, and offer a better solution.
Posted by Roger G-S at 09:07