We Built This City On Nickels and Dimes

The Babbling Bane took Talysman's system of city "quarters" literally and used a handful of random coins to improvise a village layout.

I think there is huge potential in this idea and have expanded it to this One Page supplement. Taking a different tack, I have gone on the highest "zoom-out" level to 1/5 mile hexes holding 2000 people each, based on my sources regarding population density. It's likely that a future supplement will cover what exactly can be found in each of those hexes using a similar method. What's more, I also see a need for a more fine-grained table covering exactly what each industry and trade might be. So keep an eye on this space... 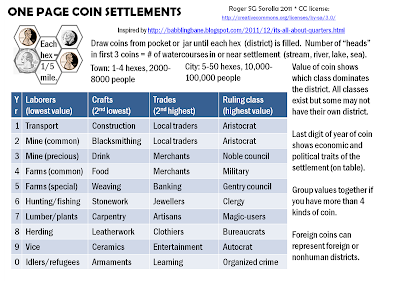 Bearing in mind the international audience, I've made the coin specification as generic as possible. If you are in the euro-zone (touch wood) with 8 different denominations of coins, for example, you could put 1 cent and 5 cent in the lowest class, 10 and 20 in the next lowest, then 50 cent, then 1/2EUR.

I have a 10,000 soul small city that needs to be populated. Gathering up small change, I find:

In the first three coins there were two heads, so this could be at the confluence of two rivers. Results, of course, should depend on the geography of your world - but they can also help to shape that geography if you are running on the fly. In this case, the two rivers idea makes most sense because the adventure is well inland.

In this arbitrary layout of coins and rivers, the pennies whose years end in 7 (left) and 9 (right) represent respectively working districts based on the timber industry and vice. As an additional detail, we can say that the vice district is the oldest part of the city, because its coin is by far the oldest. Now we see how the industry of the town can shape unknown geography, because surely there must be a great woodland nearby.

The 5p coins with a zero (left) and 6 (right) are craft districts that reflect the city's industries of armaments and stonework, respectively. This suggests a nearby source of stone, and trade bringing metal.

The 10p coin is the district of local traders, who are assumed to run the city because they are the highest value coin; any feudal lord probably lives off the map. Thus, the urban government will be elective and dominated by the traders. Based on the products of the area, these traders are not rich; their trade routes are short and deal in common materials.
Posted by Roger G-S at 13:16