Doing a page full of evil monster silhouettes has me dipping into Decadent art. It took me a while to get the Eureka moment for the vargouille, but when it came, it was glorious.

Vargouille, chonchon, penanggal - call it what you will, there's a clear niche for the flying head monster in the box of horrors. Is the vargouille based on the Iroquois flying head monster legend? Probably no more so than the others, but it's clear that the idea is strong enough to resurface among many peoples and times.

The severed head is the seat of human identity, a decisive trophy, proof of death. The expressions and thoughts of the head after death have incited ghoulish folklore in societies with customs of decapitation. So, the unforgettable manga Lone Wolf and Cub has a scene where the samurai hero classifies the expression on a severed head, sent as proof of a disgraced retainer's seppuku. In France, the guillotine inspired researches into the head's ability to see, think and even speak while detached.

Not many people are fans of the implementation in AD&D's Monster Manual 2, with hit point drain as junior-league level drain. But the concept of the monster is strong, even with the beefed-up (if cliched) horror-movie infection power in 3rd edition. It could do anything - or just something completely unexpected - and still be a most unnerving foe. 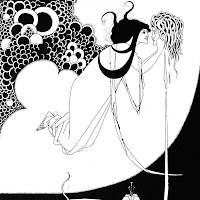 For this particular silhouette I used Aubrey Beardsley's illustration from Oscar Wilde's Salome, yet another exhibit of the unwholesome fascination with decapitation. Wilde's play was banned in London as blasphemous. Its finale unchains a perverse sensuality as Salome, at great length, kisses and fawns over the severed head of John the Baptist. The whole Biblical story has been through so many layers of decadence by the time it gets to Beardsley's pen that it hardly seems impious to use the image of the head as the basis for the vargouille. With its snaky hair, it's halfway a demon already.
Posted by Roger G-S at 23:49