Happy 40th birthday, D&D! The world's oldest fantasy adventure role-playing game?  Yes, but ... most of the world doesn't know about the role of science fantasy in the first eight or so years of your existence. The genre purges of the 80's - serious fantasy only, please! - saw science-fantasy shaken out of successive D&D rule sets. But psionics, giant insects and blobs, and the crashed spaceships in both Arneson's and Gygax's games, are important sci-fi intrusions in the early game. 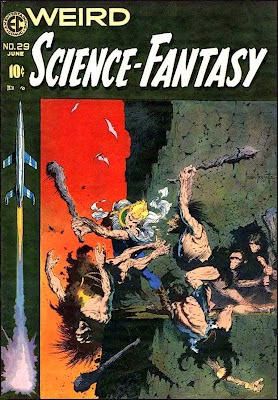 Science fantasy confronts modern and ancient ways of understanding the world, often giving credence to both. Its trademark solution is to identify witchcraft with the quasi-scientific ideas of ESP and dimensional travel. Most significantly, this happens all throughout Lovecraft. The "technology of the ancients" is another frequent theme, whether we or some other civilization takes the part of the "ancients."

But beyond fiction, science fantasy casts a sympathetic light onto the gamer's own activities. You, a modern, rational person, are using actuarial tables and polyhedral number crunching to enact a Dark Ages drama. Hell - the very activity of role-playing is science fantasy!

If any more proof is needed, below are the inspirational works and authors from Gygax's famed Appendix N. I've highlighted them as non-science fantasy (yellow), science fantasy by one of the three definitions below (green), or straight science fiction, albeit sometimes with a medieval or ancient setting (blue).

2. The return of the fantastic to a far future or post-apocalyptic world. Vance's Dying Earth, Lanier's previously mentioned Hiero's Journey, and others.

3. The fantastic intruding into a world ruled by science: Lovecraft, Zelazny's Amber series, or the explorer's romances of A. Merritt.

Science fantasy is the largest of these three categories, and if you put the sci-fi authors in with it, it easily overwhelms the pure fantasy sources. I've also boldfaced what in my opinion are the most important influences on the actual game, the works that contributed most to the concept of the races, classes, magic and monsters in the game. These are evenly split between science and classic fantasy.

As I look over these influences I also realize that in my own Band of Iron campaign I've been taking a different approach to confront the mythic with the modern. Let's call it "fantasy-science." If all goes well the section of the campaign dealing with that will come to a climax in a session tomorrow, so in my next post I'll be at greater liberty to write about its secrets.
Posted by Roger G-S at 01:02