Last time, I introduced the concepts of kitsch and overload. Although kitsch-criticism was developed by members and satellites of the Frankfurt School in the mid-20th century, it's been opposed since then, for its aesthetic and economic elitism, its stand against mass production and mass preferences. I tried to separate from the loaded term "kitsch" the concept that a work of art or imagination can have effect by overloading its impact - saturating its content in the direction of commonly accepted forms, rather than perpendicular to or away from them.

I don't think there's any argument that by whatever name, kitsch or overload is the dominant form in the aesthetics of both commercial and DIY adventure gaming. In fact, it can be broken down into three elements of style that begin with an "A". The first one is the overload of Archaism.

Archaism kitsch can be seen in the way artists choose to depict that quintessential adventure setting, the dungeon. Number one earmark is the set-dressing habit of "dungeon architecture." The classic fieldstone walls and ensconced torches have a tendency to adorn even chambers deep in the earth that should be hewn out of the living rock, and where torches would quickly consume all available oxygen, even if there were minions to replace them on the hour ... 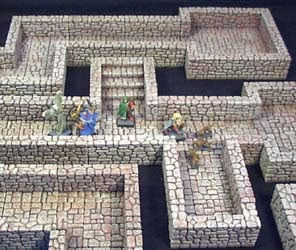 The reason for the overload: if you just have economical 5' passages hewn through stone, they could be anything - a Cold War bunker entrance, a Minoan adit, a university steam tunnel. The stone blocks and iron-reinforced doors yell "Castle!" as loudly as they can. But this is not an inevitable choice. Here's an illustration by John Bingham, from Mouth of the Shadowvein, that manages to avoid the medieval style of Archaic dungeon overload (although doubling down on Adversity with its centipede floor): 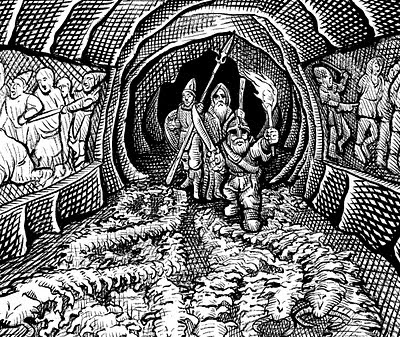 The bas-reliefs, however, remind us that another way to convey Archaism is to raid the archaeological toybox: statues, reliefs, mosaics, skull doors and demon thrones. In fact, the default overload response to "What part of antiquity?" is "All of it." So we derive the typical adventure setting with its anachronistic cohabitation of Roman, Dark Age, High Medieval, cod-Renaissance, and Nation X imitations.

Fanciful depictions of never-were civilizations and lost races also go in the mix, the costumes and scenery derived from a mix of medieval and faux-barbaric sources, with sex appeal turned way up. Compare the standard loincloths-and-bangles "Conanesque" setting with ones such as Tekumel, drawing on similar source material, but with more originality.

Focus on any one period of history, and you lose the freedom of archaic overload. If the setting is medieval, the question becomes how medieval - fairy-tale medieval, or boils-and-rats medieval? The more representational you get when it comes to history, the more you have to worry about things that make history boring - for example, a party of freebooting adventurers would almost certainly be outlawed in every jurisdiction of a feudal society. So paradoxically, even as dungeon kitsch evokes the medieval, it also avoids its hard questions.

But later developments in art, as producers judged audience reactions, created a glossy, "generic antiquity" overload feel (note the introduction of fanciful elements like the feathers and armor molding in the Larry Elmore Dragonlance piece): 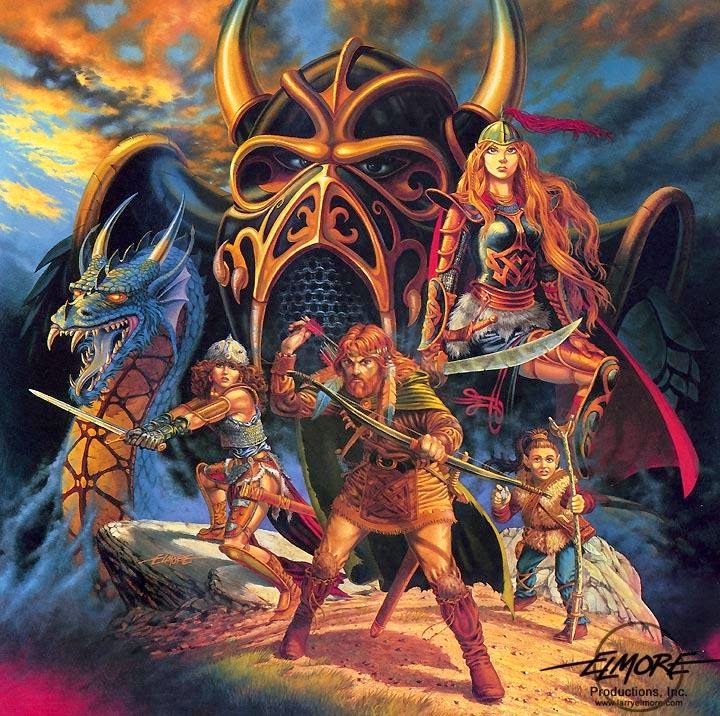 And still later, illustrations cranked up the depiction of the next overload element: Adversity. Yes, even on a costume. More next time.
Posted by Roger G-S at 08:42