Last post I mentioned strength-related actions such as bending bars, lifting gates, and breaking down stuck doors as an example of how using the dice roll to decide the environment, rather than the character's effort, can overcome some problems with traditional ability and skill rolls. Strength tests are especially good to illustrate this because they are only applications of force against a resisting object. There is no secret insight or split-second decision for the character to make. Let's see how we can apply this to a strength test system. 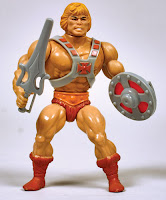 Character factors: Should strength action chances go up with level? It doesn't seem they should, unless weightlifting and muscle development are part of a special character class concept.

Of course, the Strength ability should count. I'm not going to presume to know how your system uses 3d6 ability scores, but I'm partial to a general, elegant system of 13-15 = good (+1), 16-17 = exceptional (+2), and 18 = legendary (+3). In any case, I'm going to base any character-side bonuses on the standard bonus your system gives to such things as to-hit and damage from Strength, to make record keeping easier.

As we'll see below, it will be useful to express a character's Strength in terms of "the strength of n men." Figure an average modern man (or average woman tough enough to go adventuring) can deadlift about 200 pounds, and the world record is just shy of 1000. Then for simplicity's sake, erring on the He-Man rather than strictly realistic side, a +1 modifier corresponds to the strength of two men, +2 to three and +3 to four (or two men, who each possess the strength of two men).

Negative modifiers fractionate your strength, so at -1 you have the strength of half a man, a third at -2 and a quarter at -3.

Also, nobody's ever noticed this, but encumbrance really should matter when making some tests of strength. There's a reason why He-Man wears nothing but a Speedo, metal suspenders, and boots. If you're trying to pull iron bars, you're also trying to pull the weight of your iron gauntlets and vambraces; if you're trying to deadlift a stuck gate, you're also struggling under the burden of your backpack full of gold pieces. A reasonable penalty would be to shift the character down one modifier when heavily encumbered, so that +1 becomes average and average becomes 1/2 a man. For door opening, the load becomes part of your mass, so it shouldn't count there.

Depending on your campaign, small size characters like dwarves and halflings may take a general -1 modifier category to all these feats, due to their smaller mass and leverage.

Circumstance factors: This is where you roll to find out just how heavy, or strong, or stuck, the object you're trying to budge actually is. While all kinds of complicated weight and architectural calculations might come in here, really our "n men" system makes it simple. We only need to know two things: how many persons can apply themselves to the task at once, and how many man-strengths does it take to move? Whether for bars, gates, or difficult doors, a simple d6 table can be ginned up. You can roll on it, roll twice taking the highest or lowest according to your sense of the area's difficulty, choose a result on the spot, or work out each test's difficulty as part of adventure design. Just write two numbers next to each door, or zero if the door opens easily.

First roll: How much force is needed? Difficulty in man-strengths.

The descriptions are only for scale, as it were, and can sometimes be rolled separately from true difficulty. Appearances can be deceiving; strong-looking obstacles can have a hidden weakness, weak-looking ones a hidden strength. Rust and corrosion add +1 to difficulty for doors and gates, -1 to difficulty for bars.

Ingenious parties may figure out ways to increase the number of man-strengths applied to the problem through rope, rams, or leverage.