Welcome all. In this blog I'm going to keep a jotting of my thoughts about game design, in whatever game I'm having design thoughts about at the moment.

Right now my thoughts are all about D&D systems in various "old school" incarnations. In fact, my blogroll pretty much consists of writers I've found have interesting thoughts about roleplaying in that system. That may change as I move my thoughts on to other topics like board/card game design, wargames, and CCG.

I'll also use this space to post my own amateur productions for the public domain. Right now I am close to finishing a booklet of low-level monsters for Swords & Wizardry. Another longer-term project is a complete reworking of the D&D character classes and spell lists - an attempt to combine New School variety with Old School elegance. We'll see how that pans out.

So, old D&D. It's not about nostalgia for me. It's about the new insights into an old game, summed up most eloquently in Matt Finch's Primer. And with that, the possibility of players old and new knowing more, and playing better, than most of us ever did in 1982. 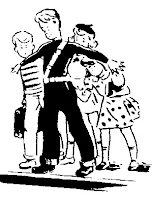 Key to understanding the different forms and flavors of D&D, or really any refereed game, is knowing who or what the system gives authority to. How do you determine what things happen, and whether plans translate to success in the game?

Referee and Players
One of Finch's key points about the old school ethos is that authority comes from "rulings, not rules." The examples of tactical play in the Primer in fact show an even more complex principle. It's not just ruling by referee fiat, or player say-so, but by an active conversation between referee and player.

While the referee's authority is final, the player moves things along, proposing and trying actions that generate new rulings from the referee. If the authority tips over too much in favor of the referee, the players don't feel like they are playing. You get bad DMing like the play example in the 1983 Mentzer edition of D&D, where the DM starts to tell the players what they do, think, and feel. But too much in favor of the player, and you get a walkover campaign with no real challenge - an infantile world of primary-process wish-fulfillment.

That's on the tactical level. But it also works on the strategic level. The old school love of open-ended "sandbox" settings and many-forking megadungeons - the distrust of pre-ordained plots - speaks to the same reliance on improvised communication between players and referee.

Even more relevant is the return to underwritten rather than overwritten adventure locations. Yes, crass practical reasons might underlie the appeal of one-page dungeons and one-sentence room descriptions. Grown-up gamers have less prep time on their hands. But the minimal approach to campaigning also gives room for the same kind of conversation between players and referee. Players say where they want to go. Players, not referees, get themselves into trouble, come up with plot material and adventures. Referees improvise dungeon features, creature tactics, villagers and taverns. There is no boxed text to read.

That's great! That's golden! Indeed. But underlying this is the assumption of trust - of fairness. Because the ultimate authority rests with the referee, players have to trust that their referee keeps both tactical and strategic play balanced between possibility and challenge. It's not just a trust in the referee's good will, but trust in ability to generate fair and believable content on the fly.

The referee in turn expects the players to respect his or her authority - to push the implicit limits of play, certainly, but not tiresomely, and never to challenge the referee's final "No."

That describes the improvisational system where referees, and secondarily players, have tactical and strategic authority over the game. Take this idea to the utmost, and you end up with a refereed Engle matrix game, or something like the wonderful Baron Munchausen, where all actions are resolved by proposal and counterproposal. But D&D is not so free-form. There are rules - for characters, combat, saving throws, magic, and (controversially) non-combat skills. Why are there rules?

And - because I'm trying to keep these posts at a reasonable length - I'll explain what I mean by that in my next post.
Posted by Roger G-S at 11:23