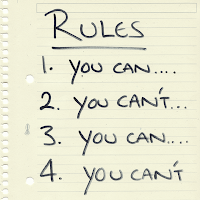 And by extension, in systems where the player-player conversation also falls down. The Legend of the Five Rings CCG, like Magic and so many collectible card games of the Class of 1994, started out with rules and card wordings that in many places had to be interpreted by good faith and good will. Issuing rulings was entirely a fan-supported effort, and by fan I mean Jeff Alexander. The atmosphere was more relaxed. Players at competitive levels were open to improvised stunts that a more serious game would have frowned upon. Like the two Dragon Clan players at the Day of Thunder championships who "settled their differences in the mountains" by playing their game on the tournament stand instead of their seats. Or the Scorpion Clan players who bribed the judges in-character with koku (L5R product points).

But the competitive environment evolved, with the game persisting far beyond the three-year ending point originally envisioned for its story arc. The gonzo atmosphere got separated from the game play, and spot rulings eventually weren't enough. Competitive players want to know that their questions will get the same answer no matter where they play.  The interpretations of rules lawyers get taken more seriously, no matter how strong the temptation to take them aside, casino-style, and tell them not to be such a wanker. So what previously was left to player agreement, then tournament judge decisions, moved to an official list of case-by-case rulings that got longer and longer.

When I moved from design team to rules editor for 2007's Samurai Edition, taking over from Jeff's 12 year reign as rules guru, one of my priorities was to clean up the morass of often inconsistent rulings that had accumulated over time, codifying them into a background rules document. From case law to principles, in other words. This move also created a more consistent environment, because it laid down rulings based on general rules rather than specific precedents. Fair? Very. But the door had finally closed on the carefree early days, when players had to figure out for themselves the implications of phrases like "The Samurai must not do whatever it is he was about to do."

So it goes with role-playing games. I use "game" here both in the small-scale sense of a particular referee's campaign, and in the large-scale sense of an evolving game system. RPGs, too, start to grow more rules wherever and whenever the sense of fairness starts to falter.

House rules. Let's assume that a game can start from a Golden Age of improvisation and negotiation over rule gaps in a spirit of mutual trust. As more and more spot rulings are made in this game, a sense of consistency and fairness dictates that repeated rulings be noted down. If the Dungeon Master rules that an unarmored character moves silently on a 1 in 6 chance one day, it's unfair if the next day's ruling is that he moves silently on a 25% chance modified by Dexterity. Fairness thus eventually demands the expansion of house rules - the equivalent of a local scene judge's consistent way of making rulings in a CCG or other complex game. This evolution is an ideal, but the truth is that even before house rules, all but the most freeform of games start out from a core of basic rules. These rules are simply the designer's idea of the basic stuff that should be consistent in the game in order to be fair. Everything added on serves the player's and GM's sense of what should be fair - opening some avenues in a consistent way, closing others that prove abusive.

Standardization. The next step of evolution, then, is when house rules are not enough to serve an expanding scene. This is the step that Gary Gygax explicitly took in the AD&D books, which filled in many of the gaps previously addressed by house rules, in the interest of greater portability of players between different campaigns. For some, fairness suffers if the house rules are arbitrary. (In my experience though, the profusion of rules in AD&D in fact led to a sort of house-ruling by subtraction. First off the plank in our campaigns: things like psionics, weapon vs. AC modifiers, and the grappling system.) In CCGs, this step is represented by the precedent-based rulings document.

As with CCGs, and as also noted by Gygax in AD&D, the growth of serious competitive play at conventions also created a push for standardizing house rules into game rules. Fairness has to depend more on rules if the players don't know each other socially and if groups are competing for some award.

Market-driven reasons also count. One way to sell books is to fill them full of new official rules you just can't do without.  Then there's demographics. It is hard to escape the involvement of new gamers, younger people, or the kind of difficult folks that nerdish hobbies seem to attract. Rules create a superficially easier way to create that sense of fairness without requiring much in the way of trust, life experience, or social skills.

All this has been noted before in various places in blog-land, but no matter how strong the rules, there still has to be some level of agreement on how far the rules can be bent, exploited, and munchkinized. I'll never forget the day one of our long-time players brought a female friend back from MIT to play in our campaign. We pretty much had an agreement to play straightforward heroic-style AD&D, but this young woman threw every cheesy trick imaginable, from the Command spell using "masturbate!" to creating hand grenades by having Magic Mouth + Fire Trap cast on clay balls. She was playing by the rules, and would have torn up a convention game. But she wasn't playing by our unwritten rules. That's also a matter of trust and fairness - even if our way of playing to the spirit of the game was one that competitive gamers would sneer at.

Consolidation. In CCGs and other complex games, the case law of competitive game rulings can accumulate and make it hard to learn and see the underlying principles, requiring a housecleaning and simplification. Likewise, the ever-mounting number of rules and options across the supplements of a long-lived roleplaying system can reach a point where they would most obviously be improved by consolidating the mechanics involved. This was most famously the promise of d20 D&D - to compact the mass of charts, tables, ascending and descending numbers, different dice rolls, and subsystems over 25 years into one core mechanic; to make monsters work like PCs; to get combat down to a science. Ironically, this simplification was quickly overwhelmed by the profusion of character-based features and cruft, and it turned out that giving monsters the same stats as PCs wasn't really a step toward simplification of play. But these faults were bolted onto a rock-solid mechanical chassis, one that Castles and Crusades in particular has taken advantage of while adopting a more stripped-down set of options.

Next in the series: Dice and fairness.
Posted by Roger G-S at 00:57