I haven't posted that much about my Tomb of the Iron God campaign - though I did share one memorable mini-game event. I have been reluctant because a) I'm not sure people want to read play reports, honestly and b) it's so tied into the Tomb that I really wanted to wait to the end to do a report.

That report is coming, but it will be more a review of the module and description of how I altered the Tomb for my playing style, than what the players did therein. And to get into that I need to talk about the three things I find useful in an adventure key, without the cliched and restricting terms "crunch" and "fluff". 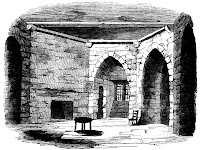 Analog details: Descriptions in real-world language of the physical environment, serving three purposes: to set an atmosphere of immersion and discovery; to give hooks for player creativity as they interact with the surroundings, and to provide grounds for old-school rulings of the kind famously described in Finch's Primer. This can also extend to psychological descriptions of NPCs and their motivations.

"This room is a small domed natural cavern 10' high at its apex. Its walls are moist and caked with formations of off-white and beige limestone, while a layer of fine sand covers the floor. A crude gate of half-rotted oak logs lashed together with rope stands at the north exit, held closed by a twine latch on the inside. A patrol of 6 kobolds armed with clubs and throwing stones is resting here and telling stories. The troops are wary but led by a hothead, Kzitch." 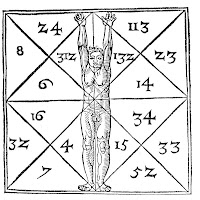 Digital stats: Numbers and classifications in game terms, on which game procedures and rules can be based.

Procedural instructions:Directions for running the adventure in an if-then format.

"In this room are 6 kobolds including a leader. If they detect the party first, the leader will take 1 combat round to rally his wary troops, and then charge headlong. If surprised by the party, they will rush behind the gate and attempt to hold it against the party. If the gate is pushed by those on one side it will start to topple forward to crush those on the other side, possibly creating a shoving contest."

So, at one end of the descriptiveness scale is the minimalist kind of description found in the Stonehell or Castle of the Mad Archmage megadungeons. Statblocks are often dispensed with, you are lucky if you get hit points for the creatures, and the DM is usually left to provide details about the physical surroundings and play out the logic of the encounter.

At the other end is the maximal style of, say, Ruins of Undermountain, where everything and every contingency is described along all three dimensions in great detail, you get to know every hobgoblin's government name (I'm hardly exaggerating) and one room description takes up half a page to two pages.

I actually find all three of these elements useful, in the appropriate doses. It's good not to have to flip through a rulebook to find an armor class, and good to have some idea of the monster strategy. But there has to be some compromise, because I want the written material to be manageable and not stretch over multiple pages. Of these three, the one I can most easily come up with myself on the fly is the procedural, and the one thing I would most like to see is the analog.

You see, in Old School play ... fluff is crunch. The sandy floor, moist walls made of soft stone, composition of the gate, and disposition of the kobolds all can feed into the players' improvised plans and the DM's improvised rulings. Critics of "fluff" in adventure writing, already prejudiced by that term, call it unnecessary. Indeed, the prose need not be purple. But basic material facts about the structure of things are something I'd rather not have to improvise, even though I have done so many times running both Tomb of the Iron God and Castle of the Mad Archmage.
Posted by Roger G-S at 21:16