Here's the difference between an immersive game and a story:

So the person playing an immersive game shouldn't be aware of a story structure to his or her experience, either. The player should be focused on the play within the world, not consciously waiting for the big twist, the climax moment, or any of the other screenwriting-class crutches. ("Hey, GM, is this the part where they invade my safe space?")

Just like the experience of playing a tactical miniatures game, i've found the experience of playing a "story game" with mechanics aimed directly at narrative elements can be enjoyable, but is ultimately somewhat "cool" in all senses of the word. It sticks a critical, self-aware distance between the players and the characters. Perhaps this is what some people want ... but to me it comes off a tad insecure. 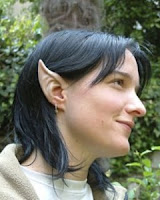 Embrace character identification! It's our hobby's dark, dorky secret. Hell, I'll even let you wear elf ears to the table if that helps.

These thoughts have come up as I preside over the wrapping up of our Tomb of the Iron God game. Instead of a big, climactic mastermind fight, there have been a number of tense moments, revealing areas, and epic battles, and the party is currently debating how many loose ends to tie up in the dungeon before moving on. C'mon ... you know you want to fight the Eater of the Dead ...
Posted by Roger G-S at 23:03