Another Consolation Class: The Dilettante

Last weekend I had a player roll up another character with no bonus-giving ability score. Although he happily took on the role of the gnome I have set aside for such an occasion, I realized I was getting a little tired of gnomes. So I started thinking of another profitable class choice for the old-school 3d6-statted PC who has nothing.

A common theme in adventure fiction is the city slicker, coxcomb noble, pretentious artiste, or other product of civilization whose social advantages are stripped away in harsher surroundings. Brom Garrett in HBO's Deadwood and a million dudes before him, the Sayers missionaries in The African Queen, or the various European functionaries in Heart of Darkness come to mind. With such a character in tow, dramatic and role-playing opportunities abound. There is high comedy when they happen to save the day, low comedy when they bumble, and black comedy when they buy the farm or the party decides to frag them for their loot.

At the same time the concept has a limited shelf-life in play, so I came up with the idea to have the dilettante character be a kind of chrysalis. If you can make it through first level with him, he retires and sends in someone better with all the experience he's earned (and it's a good idea if you're playing in a system with variant xp advancement to be very generous, leveling him up by, say, 1000 xp). 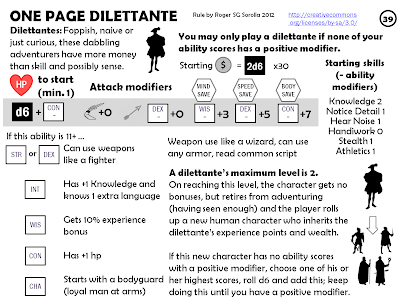 If you're anticipating problems with your hardened adventurers eyeing the dilettante's purse and fancy armor covetously, you can hint at social consequences should the well-connected adventure tourist perish. These might include having the higher-level character that was waiting on deck for the PC become a sworn enemy.
Posted by Roger G-S at 09:18