The Die of Crazy Coincidence 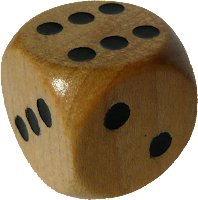 Having praised the loose-ended approach to building a fictional story, I want to share a device I use in play to tie loose ends up. It is a six-sided Die of Crazy Coincidence. When I deem it possible that a crazy coincidence might happen I roll it, and the coincidence happens on a 6.

A couple of examples:
In literature, coincidence has had a long and controversial history. Aristotle thought it added greatly to  satisfaction with the story if, for example, you had a guy who murdered some dude being killed by the self-same dude's statue falling over. Early Western literary genres - romance, picaresque - thrived on scenes where characters thought left behind cropped up again, or new characters had some kind of connection with old ones. This technique was disparaged by 19th century realists and 20th century modernists, but made a comeback with postmodernism. Today's literary advice for amateurs generally warns away from coincidence, though if you read closely you'll see they take "coincidence" to mean an unexplained, deus ex machina appearance at the end - not the proper harvesting of a coincidence that is carefully developed earlier on in the story.

All this comes from my reading of an article by the literary scholar Hilary Dannenberg called A Poetics of Coincidence in Narrative Fiction (Poetics Today 25:3, Fall 2004, if you have university library access). Let's leave aside the theme of separated family members meeting by coincidence - which underpins a surprising number of classics from Oedipus Rex, to The Tempest, to Fielding's Tom Jones. A more general use of coincidence, corresponding to my use of dice, is to have characters meet again when the reader thinks they have separated from each other.

In general, Dannenberg says that such coincidences in literature demand an explanation by the author, who often complies. Sometimes coincidence is explained explicitly as a sign of the hand of Providence within the story. Other times it's done with a nod and a wink to literary contrivance; certainly it is more satisfying to pick up an old character where they left off and develop them further, than to start anew. But at still other times, particularly in realist novels, it's just explained as one of those chance meetings or an incredible happenstance. In effect, this last one is the explanation I give my players when I announce the chance for a coincidence and roll the die in plain view.

Now, if I was being a total realist about things, the coincidence die would only hit on a 1 in 100 chance or lower. Indeed, sometimes when something would be just too bizarre a coincidence, I roll 2 dice and require 2 sixes (in today's session, there were human heads on stakes by the side of the road - does anyone recognize them?) Yet even this 1 in 36 chance, or the 1 in 6 normal chance, is weighted heavily to let coincidences happen. And in this I recognize I'm telling a literary story, that sometimes could get some good mileage out of recycling and developing a character, but works best if it's seen as not completely stage-managed.
Posted by Roger G-S at 12:00